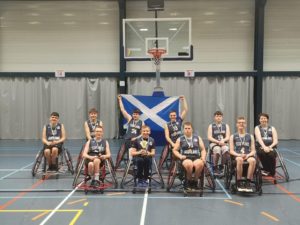 The same afternoon the squad faced BC Oostende, the second Belgian team in the tournament, and picked up a massive 70-18 victory. Lothian Phoenix’s Logan Kidd led the way in the fixture, with his tally for the game reaching 28 points. Cameron Watson recorded 18 points whilst Blair Marshall added 10.

On to day two and the Scottish side faced German side BG Baskets Hamburg, coming out on top 34-30 to secure a place in the afternoon’s final. Captain Ben Leitch, who plays domestically with Glasgow Rollin’ Rocks, led by example by picking up 19 of the team’s points.

The final on Sunday afternoon saw Scotland face BG Baskets Hamburg for the second time that day and the result was the same as they again won by four points, this time 48-44, to lift the trophy. Ben Leitch was again the star for the team, recording a double-double.

It was a massively successful weekend for the squad both on and off the court as the first ever Wheelchair National Academy returned to Scotland on Monday afternoon with the trophy.