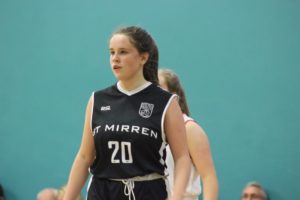 A strong fourth quarter from Perth Phoenix saw them overcome St Mirren 80-63 in the SBC U18 women’s division on Sunday afternoon.

The home side started the game quickly, building an early five-point lead. Haylie Todd (25 points) netted four points in the opening few minutes on her way to a game-high 25 points. Perth quickly extended their lead to double digits as Taryn Cummins (13 points) and Todd both added several baskets.

St Mirren found their way back into the game later in the quarter, with six points from Kate Galloway (24 points) and a three-pointer from Ella Duff narrowing Perth’s advantage. Lisa Low added a late and-one to halt St Mirren’s momentum as Phoenix ended the first up by six. 22-16.

Both teams traded baskets in the opening minutes of the second as St Mirren looked to get their nose in front for the first time. Galloway added six successive points for the visitors, as they found themselves within a basket of the lead, whilst Hannah Eadie and Eilidh Davies both found the basket for Phoenix.

St Mirren’s persistence paid off late in the second as they edged ahead through four more points from Galloway. Phoenix added another and-one, this time from Todd, but it was advantage St Mirren as the half ended. 33-36.

The visitors opened up a five-point lead but Perth quickly turned it around as four points from Galloway, followed by a three-pointer from Rosie Lloyd (17 points), ensured the home side restored their lead. Both teams struggled to gain an advantage as the score was tied on several occasions over the following few minutes.

A nine-point streak from Perth started the fourth as the home side gained a double-digit advantage for the second time through four points from Galloway and a fourth three from Lloyd. Galloway added eight consecutive points for St Mirren as they fought back to within four points with five minutes to play.

In the final minutes it was all Perth as a fifth three-pointer from Lloyd was followed up with another from Cummins. The home side finished with a flourish with Cummins, Eadie and Todd all finding the basket in the dying minutes to secure the win for Phoenix. 80-63.