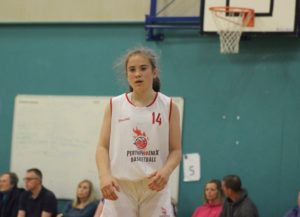 Perth Phoenix moved to second in the SBC U18 Women’s division after picking up an 80-63 win in last weekend’s SBC Game of the Week. Haylie Todd netted a game-high 25 points whilst Kate Galloway scored a team-high 24 points for St Mirren, who currently sit 8th in the table.

Sony Centre fury retained top spot in the league with a 70-56 win over Glasgow City. Fury’s 44-57 loss to Phoenix remains the only mark on their record as they currently sit 5-1. Glasgow City currently find themselves mid-table, with a sole win over City of Edinburgh so far this season.

Inverness City picked up a win on the road, overcoming City of Edinburgh 69-60 in Portobello. The side sit 2-2 after their opening day victory over Polonia Phoenix was followed up by defeats to Fury and St Mirren.

Lady Rocks secured a big win v Glasgow Fever, 27-76, to remain the only unbeaten side with four wins on the bounce. They currently sit third in the table having played fewer games than Perth and Fury. Glasgow Fever find themselves bottom, however the team has only played three games so far in 19/20.

In the division’s fifth game, West Lothian Wolves took the win at home to Polonia Phoenix, improving their record to 3-1. Wolves now sit fourth in the division, four points off top spot but with two games in hand. The Bathgate side also boast the best defence in the division, conceding an average of 44 points per game.