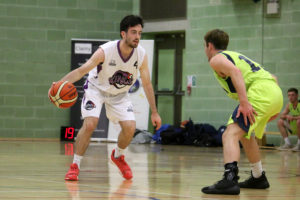 City of Edinburgh Kings remain just two points off top sport in the Soho Wealth SBC Senior Men’s division after they ended Dunfermline Reign’s unbeaten start to the season on Friday night with a big 104-81 victory at Portobello.

Ali Mackay (13 points) started the game with a three-pointer – the first of 14 baskets from behind the arc for Kings – before Dunfermline netted two without reply to edge ahead. The teams traded baskets with Ryan Armour (13 points) adding his first three-pointer of the night for Kings and Eric Potts (19 points) scoring eight early points for the visitors.

A Neil Rowan (15 points) three allowed Kings to edge ahead before Potts and Nicholas Sim (11 points) ensured the lead swapped hands yet again. Reign then gathered a little momentum, with Jake Sirrel (13 points) scoring six consecutive points – including a three-pointer – as Reign ended the first up by four. 22-26.

The second started as the first had ended with both teams trading baskets. With Reign up by five and looking to build an advantage, Matthew Wilcox (22 points) sunk a three-pointer to bring Kings back within a basket. Both teams added two more before Finlay Wood’s (19 points) first three gave Kings the lead as half-time approached.

The lead then exchanged hands three times in quick succession before an 8-2 scoring streak from Kings gave them a small cushion for the first time. Reign fought back again, with Sim scoring seven consecutive points, but Kings went to the lockers up by three. 49-46.

A 17-1 streak for the hosts at the start of the third killed Dunfermline’s momentum and swung the game firmly in Kings’ favour. Armour, Wood and Wilcox all caused problems for the Reign defence as Edinburgh built a comfortable double-digit cushion.

Things went from bad to worse for Dunfermline as Craig Ferguson (11 points) was forced out of the game with a rib injury, leading to long break in play. Reign managed to regroup during the stoppage, scoring nine points in the latter stages of the quarter through Sirrel, Bruce Taylor and Andrew Travers, but the damage had been done. 82-65.

Back-to-back three-pointers early in the fourth from Kings killed any hope of Reign retaining their unbeaten status. Wilcox and Konrad Kontorski (20 points) both added five points for the home side, whilst the visitors looked to Potts to keep their score rising.

A late scoring streak from Reign was cancelled out by a yet another three-pointer from Kings as they claimed a big win and maintained their title challenge in the Soho Wealth SBC. 104-81.