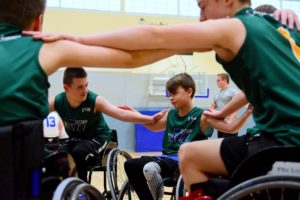 Things are heating up in the first Jr. NBA campaign of 19/20 as schools compete across the divisions for their place at the conference finals later in the year. Find out how each of the divisions is shaping up below:

All four teams will meet again at the semi-finals in Perth on November 23rd.

Cleveland Cavaliers Balgreen remain unbeaten in the Central division, recording one win and a draw in their second round of fixtures. The draw came against Chicago Bulls Pentland, who also went unbeaten throughout the day.

Sony Centre Fury hosted ten games in their opening round of fixtures as five local schools came together in Grangemouth.

Grizzlies Bonnybridge went unbeaten during the day, as they won against each of the other schools. San Antonio Spurs overcame New Orleans Pelicans Comely Park, however they fell in their next game v Houston Rockets Maddiston. Maddiston also picked up a win v Pelicans Comely Park.

Updates form the Southeast and Atlantic divisions will follow after the next round of fixtures.

League tables for each of the divisions can be found here