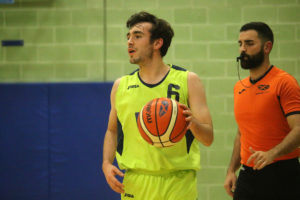 The Soho Wealth SBC Senior Men’s division is wide open after seven weeks, with four teams keeping pace at the top of the championship.

City of Edinburgh Kings currently sit third in the table after Friday night’s SBC Game of the Week win over Dunfermline Reign. The hosts had six players hit double digits in scoring, also recording 14 three-pointers. The win leaves them just two points off top, with Dunfermline still on pace despite the loss, sitting one place behind with a game in hand.

St Mirren moved Sony Centre Fury into top spot with an 83-70 win over Glasgow University on Friday night. The Paisley side boast a record of 6-1, whilst the loss for Glasgow sees them remain bottom of the table without a win.

Boroughmuir Blaze picked up a big win over Ayrshire Tornadoes after a tough start to the season. The Edinburgh-based side has lost out to all of the top four sides in their opening five fixtures, currently sitting fifth.

The division’s fourth game came on Sunday night as Edinburgh Lions welcomed Perth Phoenix to the capital. Perth picked up their second win of the season, 74-64, meaning they sit sixth in the table with a record of 2-3. The loss is Lions’ seventh consecutive defeat in a tough start to their season.

Sony Centre Fury – who remain unbeaten in the league – took advantage of their bye week, inviting BBL side Glasgow Rocks to Grangemouth for a friendly. Rocks picked up the win, 46-91, as both teams used the game to provide game time to their rosters.