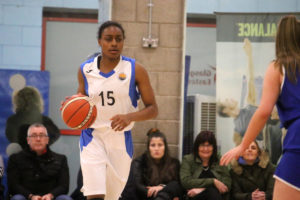 West Lothian Wolves overcame Glasgow City 65-53 on Saturday to progress to the semi-final of the U16 women’s Scottish Cup.

A three-pointer from Wolves’ Sally Campbell got the visitors on the scoreboard and they quickly built a lead with baskets through Eve Macdougall (13 points) and Erin O’Sullivan (16 points). City responded with three points from Divine Obi (19 points).

Macdougall and O’Sullivan both added further baskets for Wolves, with the duo combining for 14 of their team’s 19 first quarter points. Scotland U16 international Niamh Rana (25 points) scored her first basket of the day, on her way to a game-high 25, but City ended the first down by ten. 9-19.

Rebecca Douglas (13 points) netted her first basket for Wolves in the second as the visitors extended their lead to 12. Rana and Obi combined for the hosts to keep pace throughout the quarter, with the pair adding seven and six points respectively.

Wolves remained on top offensively however, with Campbell, Douglas and Amy Whitton (10 points) all contributing as the Bathgate-based side led by 13 at the half. 19-32.

A 10-5 streak from Wolves at the beginning of the third saw them extend their advantage to a game-high 18 points. Rana and Obi continued to reply for City, as they cut some points from Wolves’ lead.

In the later stages of the third City had their best offensive spell of the game so far, before a late basket from Macdougall left Wolves up by 17 with ten minutes left to play. 35-52.

It was the hosts who finished the game strongly as Rana added four early points. Obi added four more and Douglas replied for Wolves, scoring three consecutive baskets for her team.

With the deficit reduced to 13 and five minutes left on the clock, Rana and Obi combined for ten late points. Campbell shot two from two for the free throw line before a three-pointer from Macdougall concluded Wolves’ scoring. It was Rana who added the game’s final score as Wolves came out on top by 12. 53-65.