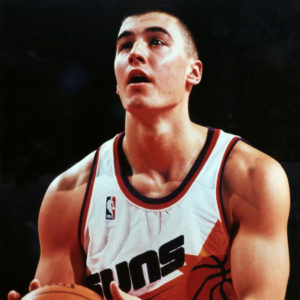 A successful career saw Milič play for the Phoenix Suns in the NBA as well as winning a Spanish League Championship with Real Madrid. In addition, he won 4 league championships in his native Slovenia, and his career also saw him play in Italy, France, Iran and Kuwait.

Milič will also visit the Falkirk Fury and West Edinburgh Warriors Divisions to take in more Jr. NBA action and meet the players and coaches.

Kevin Pringle, CEO of basketballscotland, is delighted to have Marko visiting the young players in Scotland:

“We’re extremely privileged to have such a fantastic basketball player as Marko join us for the Jr. NBA Wheelchair League Conference Finals. It’s great he will also watch some more of the Jr. NBA action whilst in Scotland. I have no doubt Marko will be an inspiration to all the young players and it is great for them to chat with, and learn from, a great of European basketball.  It is also great for Marko to see how much the young players enjoy the Jr. NBA and playing basketball in Scotland.”

Supporters are welcome to come along for the event, which takes place from 1pm at Perth College Academy of Sport & Wellbeing on Saturday, 23rd November.