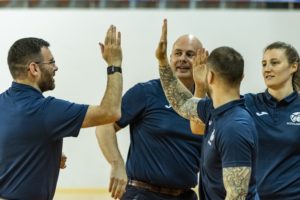 The basketballscotland National Academy staff have all been selected ahead of the 2019/20 international season, which starts with a Tri Nations tournament in Manchester later this month.

The U16 Women will be led by Boroughmuir Blaze’s Eoghann Dover, who will be assisted by Caledonia Pride Assistant Coach, John Day. West Edinburgh Warriors’ Louise Moyes will be the Team manager, with Tony McDaid chosen as the SBC National Selector.

Speaking after his appointment, Eoghann was looking forward to making the step up:

“I am delighted to have been appointed as Head Coach of the U16 National Team, after spending time as an assistant coach and working within the National Academy set up last season I’m looking forward to the challenge.
We have a highly motivated staff and a pool of young ambitious players and we all can’t wait to get started.”

Inverness City Lions’ John Kerray has been selected as the Head Coach of the U16 Men, with City of Edinburgh’s Katie McPherson working alongside as Assistant Coach. Inverness’ Tracy Tamijmarane will support the squad and staff in the role of Team Manager whilst the SBC National Selector will be Sony Centre Fury’s John Bunyan.

John Kerray is excited to help the squad develop in Manchester:

“The National Academy programme is a great opportunity for me as a coach to work with and help our top U16 players develop their talent behaviours. Resilience, intensity, teamwork, dedication, responsibility and communication are all traits that will take them to the top of their game on and off the court. It will be great to work on these in a competitive environment when we take on England and Wales in the Tri Nations Tournament in Manchester. My aim is for the boys to leave Manchester as better players, motivated to keep working on their Talent behaviours to improve themselves.”

Caledonia Pride’s Donnie MacDonald makes the step up to U18 Women after spending last year with the U16 squad. Lady Rocks’ Nadele Strain will be Assistant Coach for the squad. Fraser Hamilton will be the Team Manager and Rachel Simpson contributed as the SBC National Selector.

Donnie, who is familiar with the group of players, is looking forward to the challenge of facing England and Wales:

“It’s great to have the opportunity to work with the U18 Women’s National Academy squad. They are a talented group, with the majority contributing for their clubs in the senior national league or in the WBBL. The Tri Nations will be a great test for the group, but it’s one that I know the players are relishing just as much as I am.”

City of Edinburgh Kats’ Head Coach, Craig Nicol, will lead Scotland U18 Men after spending last summer as an Assistant Coach of GB U16’s. Craig will be assisted by Cory McCabe, who worked with Scotland U16’s last year. The team Manager for the men is Fraser Hamilton, with the SBC National Selector James Steel adding value to the process.

Craig Nicol believes his squad is full of talent and is ready for the opportunity:

“Really looking forward to working within the Scottish National Academy. We have a very talented group of players with a lot of experience of competing against the best in Britain. Tri Nations will be a great chance for the players to perform against tough opposition and provide a platform for them to showcase themselves on the national stage.”

Announcements regarding the four training squads will be made in the near future.