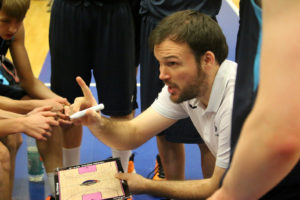 Craig Nicol, Head Coach of City of Edinburgh Kats, has been named as the Head Coach of GB U18 Men for the 2020 and 2021 European Championship campaigns.

The U18 Men will compete in FIBA U18 Europe Division A next July, which is due to take place in Bursa, Turkey. The team was drawn into Group B during the draw earlier this month, with Israel, Germany and France selected as GB’s opponents.

In 2018, Craig worked alongside Rob ‘Bevo’ Beveridge as Assistant Coach for Scotland’s Senior Men at the Commonwealth Games on the gold Coast, where the team finished in a historic fourth place.

Upon hearing the news, Bevo was full of praise for Craig, believing he will be successful with the squad:

“I am absolutely elated to hear of Craig’s appointment as HC for Great Britain U18 Men. I have so much respect for Craig both on and off the court and know he will do a tremendous job leading this team.”

Domestically, Craig’s City of Edinburgh team is currently unbeaten in the SBC, sitting top of the Senior Women’s division with a record of 10-0, having also booked their place in the Final of the Scottish Cup.