You are here: Home / Blog / News / Tri-Nations: Day One Recap 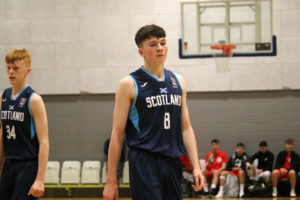 It was a tough opening day of fixtures for basketballscotland’s National Academy teams at the Tri-Nations tournament, with two wins coming v Wales in the opening six fixtures across all age groups.

basketballscotland’s U16 Men fell to England White in their first game of the weekend, 77-72. The Scots started strongly, taking a 7-point lead after the first, but England came back to secure the win. Luke Seago led the way for Scotland, scoring seven three-pointers on his way to 26 points.

On a neighbouring court, basketballscotland’s U18 Men picked up a 75-61 win over Wales. The game was tied after one and the Scots led by just two at the half, but a strong finish meant the men claimed their first win of the tournament. Louis Sullivan, who represented GB’s U18 3×3 team over the summer, was the top scorer with 21 points.

The U16 Women began their campaign with a tough game vs England Red. The young side fell behind early on, trailing by 28 at the half, but regrouped in the second half of the game. The team enjoyed their best spell of the game in the fourth, winning the quarter, but it was the hosts who took the win, 77-43. Niamh Rana and Eilidh Noble both recorded nine points for basketballscotland.

basketballscotland’s U16 Men picked up their first win of the tournament in the 1pm tip off v Basketball Wales. The teams were tied 35-35 at the half before the Scots pulled ahead in the latter stages, inspired by Euan Birch’s game-high 25 points.

The U18 Women began their tournament with an entertaining game v England White. basketballscotland edged ahead by two in the first, before England gained the lead by one at the half. The two teams were neck and neck for the remainder of the game, forcing overtime at 75-75. It was the home side who prevailed in the added time, picking up a 91-78 victory. Captain Pollyanna Storie topped the scoring charts for basketballscotland with 18 points.

England Red made it a tough start to the final game of the day for basketballscotland U18 Men, taking a 20-point lead early in the game and extending that to 29 by the half. A stronger second half followed as the teams went toe to toe, England eventually taking the win 100-72. Owen Mackle recorded 24 points, including 12 in the fourth quarter.

The U16 and U18 Men face England Red and England White respectively tomorrow to complete their schedules, whilst both basketballscotland Women’s teams will compete in two games over the course of the day. Updates will again be live on social media from 9am.