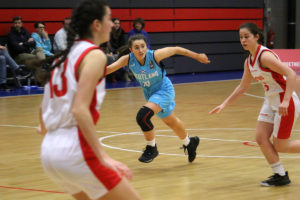 Basketballscotland enjoyed a successful day two at the Tri-nations tournament in Manchester, with the teams taking four wins from a possible six.

The first game of the day saw basketballscotland’s U16 Women face Wales, who picked up a 64-60 win over England White on day one. Wales opened up a five-point advantage in the first quarter, and that lead remained through until half-time. basketballscotland continued to fight in the second half, edging ahead by two with ten minutes to play and hanging on to take the win by a single point, 57-56. Leah Tervit Stark recorded a game-high 11 points for the Scots.

The U16 Men played their final game of the Tri-Nations v England Red at 11am, and they started very strongly, opening up a 14-point lead at the half. England fought back in the third, reducing the lead to just six, but an even fourth quarter saw basketballscotland hold onto their lead, 73-67. Euan Birch continued his scoring form from the Saturday, recording 23 points.

basketballscotland U18 Women also tipped off at 11am and, like the U16 Men, they raced ahead to a strong half time lead. Their advantage continued throughout the second half, claiming a big 27-point victory over Wales, 80-53. Caledonia Pride’s Jannike Marshall recorded a game-high 21 points for the team.

The U18 Men concluded their tournament v England White in the only 1pm game involving basketballscotland. The hosts proved too strong, opening up a sizable advantage in the opening quarters. The Men continued to fight throughout the second half, increasing their scoring right until the end of the game, but England’s offensive continued to impress as they took the win, 116-65. Captain Shaun Samson picked up 13 points.

Both basketballscotland Women’s teams concluded their Tri-Nations in the final round of fixtures v English opposition.

On a neighbouring court, the U18 Women faced England Red. The hosts edged ahead into a nine-point lead after the first, which they extended to 15 by half-time. basketballscotland reduced the deficit to nine after three, and the team completed the incredible comeback in the fourth to take the win, 62-59.