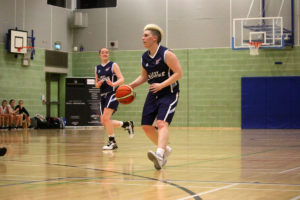 With less than a month until Lady Rocks face Sony Centre Fury in the Final of the 2020 SBC U18 Women Scottish Cup Final, Rocks’ Head Coach, Nadele Strain, discusses her team’s journey to the final, their unbeaten start to the 19/20 season and the mindset of the team.

How does it feel to qualify for the U18 Women’s Scottish Cup Final?

“I am excited. Also happy for the girls and for the club getting through to another final.”

Rocks missed out in a close final last year, will this provide some added motivation for the team this year?

“We as a team always talk about what you do next, so I don’t think our girls will be focused on what has happened in previous finals.”

It was a close Semi-Final vs Perth Phoenix that contained many players from their U16 Final success last year, what made the differene between the two sides on the night?

“Perth Phoenix are a great team and the game could have gone either way. Ultimately, we stepped up our defensive intensity and were able to execute offensively which saw us see out the win.”

That are the key characteristics that make your team successful?

“For us it’s about our team is everything, everything that each player does is for the team, our behaviour and our attitudes on and off the court.”

You’re unbeaten so far this campaign, do you think this will help the team’s confidence heading into the final?

“As a team we take each game as it comes, we don’t focus on the fact we are unbeaten this year, I think to stay ahead you need to act like your behind.”

Sony Centre Fury await in the Final, what do you expect from them?

“Fury are a tough team. They are big and physical and we look forward to playing them in the final.”

Tickets for February’s Finals can be bought online here.