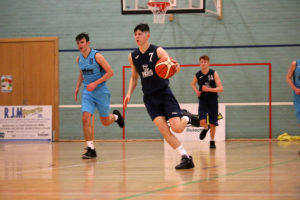 A free-throw from William Kemp (19 points) with 5.3 seconds left of the clock ensured Stirling Knights maintained their 100% start to the SBC U18 Men’s as they overcame Dunfermline reign 71-70 at St Columba’s.

Stirling’s captain, Rob Gilmour (12 points), started the game with a free-throw which 16 followed up as the visitors took an early lead. Reign’s Euan Johnston (31 points) opened his account with five consecutive points as the hosts quickly levelled the scores. Two three-pointers from Dunfermline’s Finlay Steel (17 points) and Johnston gave them a game-high six-point cushion early in the game.

Stirling responded through Gilmour and Kemp as they looked to prevent Reign gaining control of the game. Both teams traded baskets for the remainder of the first as a three-pointer from Jack Hencher helped Knights reduce the deficit to just two points. 21-19.

The start of the second was all about Knights as they embarked on a 12-4 scoring run to swing the advantage in their favour. Ben Roberts (21 points) recorded eight points during the streak as Knights looked to have pulled away.

Reign replied almost instantly with a 10-3 scoring run of their own to make in a one-point game heading into the half. Captain Johnston again led by example, scoring all ten points in the run which included two more baskets from outside the arc. 37-36.

The two teams went toe-to-toe in the third, with neither side managing to develop an advantage. Johnston added seven more points to Reign’s tally, whilst Gilmour and Kemp both added three-pointers for the visitors.

Both teams were experiencing success from distance, with Callum Clark and Steel both recording threes for Dunfermline and Kemp sinking another one for Knights in the latter stages of the third. With nothing separating the two sides, Reign ended the third up by two. 57-55.

The end-to-end action continued into the fourth period with Reign unable to pull away from Knights. Steel added four consecutive point for Dunfermline and Roberts added six for Stirling as it became a one-point game.

With just minutes on the clock Knights regained the lead for the first time since the early stages of the second quarter. Johnston kept up his scoring form to tie the game twice, with two free-throws from Knights’ captain Gilmour in between, before a late free-throw from Kemp secured the road win for Stirling.