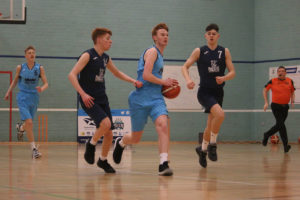 Stirling Knights extended their lead at the top of the SBC U18 Men’s division over the weekend with a one-point victory over Dunfermline Reign in the weekend’s SBC Game of the Week.

Knights trailed for the majority of the game at St Columba’s on Saturday, although the two teams were never far apart with Reign’s lead just a single point at the half. With the pair going toe-to-toe throughout the latter stages, a late free-throw from Scotland U18 player William Kemp ensuring they left St Columba’s with a 71-70 win and their unbeaten League campaign still intact.

West Lothian Wolves and Glasgow Rocks met in Bathgate, with the two sides currently sitting mid-table in the division. A strong first quarter from Rocks opened up a five point advantage which they maintained throughout the game, picking up a narrow win, 84-76, to claim their fourth win of 19/20.

Grampian Flyers moved up to fifth in the table with a big 82-28 win over Inverness City. The win was Flyers’ fourth of the season, whilst Inverness are yet to pick up a win during 19/20 and remain in 10th place.

Glasgow Rens picked up their fourth win of the season, defeating fourth-place Sony Centre Fury 69-62 in Grangemouth, to move up a place to 8th in the SBC U18 Men standings. Rens’ previous wins have come against Wolves, Inverness City and Glasgow Rocks.

In the division’s final game of the weekend, Boroughmuir Blaze travelled west to face second-place St Mirren, coming away with a 58-53 victory and improving their league record to 5-5. St Mirren remain second with a record of 9-3.

All previous results and the current standings can be viewed here.