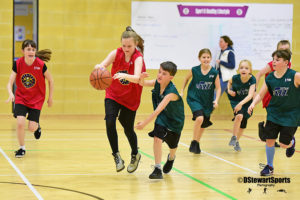 The third basketballscotland Jr. NBA League of 19/20 is set to tip off this week as the first of the drafts take place in Dundee and Paisley.

Following on from the first league – which featured teams from the east and central regions – and the world’s first Jr. NBA Wheelchair League, the programme will run from January to March and feature teams from 30 schools across the west and north regions.

The drafts will follow a slightly different format to the Autumn draft, with each division in the north conducting their own draft on 14th, 22nd and 31st of January respectively and the three teams from the west gathering at Lagoon on Friday 17th January to learn which NBA team they will be representing.

Following on from the draft, the programme will follow the same structure as previous leagues, with each division’s fixtures being scheduled over a number of weeks before the Conference Finals and Final Fours take place in March.

The latest league marks the continued expansion of basketballscotland’s Jr. NBA programme, with more than 70 clubs and schools taking part during the academic year. Speaking ahead of the drafts, basketballscotland’s Participation Manager, Amy Kirkhouse, was excited to see more towns and cities engaging with the programme:

“After a successful Autumn League, we are looking forward to working alongside six more clubs and 30 more schools to deliver the next Jr. NBA League. It’s exciting to increase the geographical spread of the Jr. NBA in Scotland, with teams from Ayr to Inverness, and to see new schools getting involved with the programme. As always, we hope that the players participating in the programme are inspired to join their local club, helping to develop and grow basketball across all of Scotland.”

Further information regarding the fixtures and schedules will be available soon.