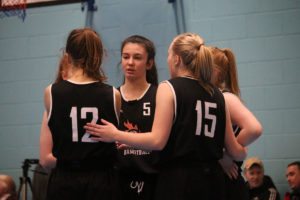 Perth Phoenix picked up a big victory over Sony Centre Fury on Saturday, 60-49, as both teams battle it out at the top of the SBC U18 Women’s Division.

The home side opened the scoring as Taryn Cummins (16 points) scored the first of her four three-pointers in the first minute of the game. Hannah Eadie and Erin Marshall (9 points) both scored their first points of the morning before back-to-back three-pointers from Fury’s Abby Rutter (20 points) gave Fury the lead for the first time.

Cummins replied from outside the arc to restore Phoenix’s advantage and, as another basket gave Perth a five-point cushion, an and-one from captain Katie McEwan at the end of the quarter meant there was just two points between the sides after one. 16-14.

Rosie Lloyd opened the second with her first basket of the game before five consecutive points from Rutter drew Fury level. Emily Melrose gave the visitors the lead for the second – and last – time as a 7-0 scoring run opened up a two point lead.

A 10-0 scoring run from Phoenix followed as they refused to let Fury take advantage of their lead. Darya White (9 points) , Eadie and Cummins all found the basket as the hosts built an advantage which they would hold for the remainder of the game. An and-one from Melrose and a late basket from Rutter helped Fury cut the deficit slightly at the half. 31-24.

A 7-0 scoring run from Perth early in the third saw the gap between the sides reach a game-high 13 points. Cummins again found the basket from distance, whilst Haylie Todd (8 points) also added to her tally for the day.

Fury responded with a streak of their own, Molly Waddell adding three points and Marshall four, as they began to claw back Phoenix’s advantage. The home side halted Fury’s run through Todd, however the visitors had the momentum as the teams headed into the fourth. 43-35

An and-one from Lisa Low at the beginning of the fourth proved crucial for the home side as five early points from Rutter, including her fourth three-pointer of the game, were supported by baskets from Melrose and Marshall as Fury embarked on an 8-0 steak and brought Phoenix’s lead back to just two points.

Fury’s streak sparked the Phoenix team into life as six different scorers added baskets in the dying minutes to give the hosts a comfortable victory. Fury added two free throws and a late three-pointer but Perth’s late surge proved the difference as the home side ended the game up by 11. 60-49.