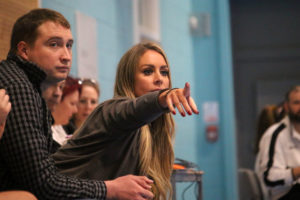 With less than two weeks until Sony Centre Fury face the unbeaten Lady Rocks in the Final of the U18 Women’s Scottish Cup, Head Coach Kim Flockhart discusses Fury’s route to the final, Lady Rocks and her team’s strengths.

You face Lady Rocks in the Final of this year’s U18 Women’s SBC Scottish Cup. How excited are you to have reached the Final?

It’s always exciting reaching a Cup Final – I’ve experienced it before with some of the girls in the team in 2017 when we faced Stirling Knights. Following the merger of the two teams, we now have some of the Stirling girls in our squad so it will be quite interesting to be in a Final with them rather than against them.

Fury were knocked out in the earlier rounds last year, what’s been the key factors in reaching the Final this year?

We didn’t perform as well as expected last season, but it was a transition season following the merger of Fury and Knights and it took some time for the girls to come together and play as a team.

You’ve come out on top in two very close games in the Quarter-Final and Semi-Final, what pleased you most about those performances?

We faced some tough competition from Glasgow City and St Mirren but being able to close out two very tight games showed our resilience.

What do you think are Fury’s strengths heading into the final?

We’re up for the game and want to win, we have some experienced players and proven scorers putting up big numbers in our league games, so I know we have the ability to win the game. I’ll not give away anything else!

What do you think Lady Rocks will bring to the table?

Lady Rocks are unbeaten at this point in time, so there is no doubt this will be a tough game. Lady Rocks are always well organised and ready to go. They have a strong inside presence and always play aggressive, high intensity defence.

They will also bring that dreaded drum…but we will have one of our own for the Cup Final!!

Lady Rocks came out on top when the teams met in the League, does this give your team motivation?

We played poorly in our first league match against Rocks and unfortunately we just couldn’t put the ball in the basket despite numerous opportunities. Of course it gives us motivation and we believe the match will be much more competive this time round.