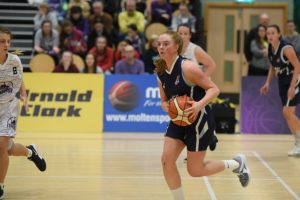 Lady Rocks handed City of Edinburgh their first defeat of the season as they recorded a 64-58 win in the Final of the Senior Women’s SBC Scottish Cup.

Rocks Captain, Nadele Strain (13 points, 11 rebounds), opened the scoring for the afternoon before early fouls gave Hannah Peacock (10 points, 17 rebounds) the chance to reply for City of Edinburgh. A 6-3 run followed for Rocks as they developed a small lead early on.

Back-to-back baskets from Kats saw them take the lead for the first time before a 6-0 run, courtesy of Katrina Kirsop (12 points) and Rona Lightbody (19 points, 13 rebounds), gave Rocks a five-point lead after the first. 14-9.

Murron Marr and Tracey Phillips combined as Kats tied the game with a 6-1 start to the second. Both teams displayed great defence as the game went two and a half minutes without a basket. Strain ended the drought and Lightbody followed it up as Rocks again secured a small cushion.

Taylor McKeown & Shannon Beattie made it nine points without reply for Rocks as they began to build some momentum. Peacock halted the scoring streak but the basket had little effect as another 9-2 scoring run followed and Rocks secured a double-digit advantage at the half. 33-19.

It took just five seconds of the third quarter for Zoe Gibson to sink a three-pointer for Kats. The basket sparked both teams into life as they both recorded multiple baskets. Two consecutive baskets from Kats’ Captain, Emma Findlay, reduced gap to nine.

Peacock and Casey Morrison (13 points) combined for a 7-0 streak for Kats, including five from the free throw line, as Rocks’ lead was slashed to just two points. A Lightbody jump shot followed before four more points from Morrison kept Kats in the chase. Both teams paid the price for fouls as seven free throws were scored in the latter stages of the quarter. 44-47.

Both teams tightened up their defence ahead of a nervy fourth quarter and it took almost two minutes for a basket to be scored. Beattie’s effort for Rocks was followed up by four points from Leanne Page as Kats tied the game with six minutes on the clock. Moments later they were ahead as Emelia Rose gave them the lead.

Rocks’ Captain led by example, scoring from outside the arc to restore their advantage but Morrison soon stole it back for Kats. A 5-0 run from Rocks made all the difference in the dying minutes as they built enough of a cushion to keep Kats at bay. The game closed with a series of free throws for each side but they did little to change the outcome as Rocks won the SBC Scottish Cup by six. 64-58.