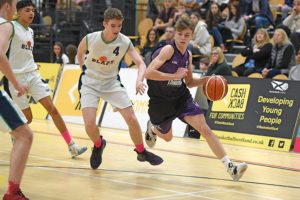 City of Edinburgh Kings claimed the U18 Men’s SBC Scottish Cup with a 89-59 win over Edinburgh rivals Boroughmuir Blaze on Sunday afternoon.

Tobi Arowolo (10 points) got the game underway before Owen Mackle (23 points, 7 rebounds) responded for Kings. The two teams traded few baskets in the opening minutes as the game took a few minutes to find its feet. With Blaze up by two, a 13-0 streak from Kings gave them an 11-point lead. Six points from captain Shaun Samson (27 points, 10 rebounds, 6 assists) and three more from Beau Davidson (15 points, 7 rebounds) gave Kings a strong advantage.

Arowolo found his range from outside the arc, briefly stopping Kings’ momentum, but their offensive power was evident as they continued with a 16-6 scoring run to record 36 points in the first 10 minutes, including 16 from Samson. 36-17.

Mackle started the second as Kings ended the first, taking just 8 seconds to record a driving lay up. Strong defensive displays coupled with both teams struggling to find their range from behind the arc saw two minutes pass before Blaze ended the scoring drought. The low-scoring period continued, with just nine points scored between the teams in the opening four minutes.

A 5-0 streak from Kings followed as they extended their lead through Finn Baxter & Mackle before Calumn Sievwright (15 points, 13 rebounds) and James Siovas (10 points) responded for Blaze. Kings continued to dominate offensively as the half drew to a close, embarking on a 9-4 scoring run to head to the lockers up by 25. 55-30.

Early fouls in the third gave both teams the chance to pick up some points from the free throw line. Kings again demonstrated their strength offensively as they record an 8-0 streak, with baskets from Mackle, Davidson and Jude Vanneste (10 points), in just 51 seconds, extending their lead to over 30.

Blaze responded well with a 6-0 run of their own, their best spell of the game, before Samson added four without reply for Kings. The baskets were the start of another 7-0 run for Kings as they cruised to the buzzer and ended the third in control of the game. 75-42.

Seven points from Mackle were only interrupted by a three-pointer from Arowolo as Kings reached a game-high 37-point lead early in the fourth. Blaze’s strong character showed as they continued to fight, picking up five points without reply.

Samson and Vanneste added five quick points for Kings with five minutes left on the clock in what was a low-scoring final quarter. Sievwright replied and from there it was all Blaze as they ended the game with a 7-2 scoring run, with Sievwright adding all seven, to reduce Kings’ margin of victory. 89-59.