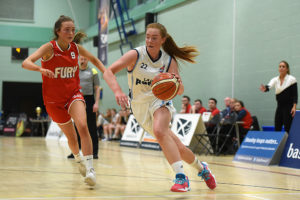 Lady Rocks came from 12 points behind early in the game to overcome Sony Centre Fury and claim the U18 Women SBC Scottish Cup on Saturday.

The team captains demonstrated their ability to lead by example in the opening minute as both Sophie Loughran (17 points) and Katie McEwan netted the opening basket for their respective teams. Emma Dunsire (17 points) and Aime Atkins went back-to-back for Rocks before Abby Rutter (19 points) and Emily Melrose (13 points) both opened their accounts by doing the same for Fury.

There was little to separate the sides early in the game and this continued as Melrose found the basket from outside the arc, only for Loughran to cancel it out moments later. The teams continued going toe-to-toe for the remainder of the quarter until a Rutter three-pointer on the buzzer gave Fury a three-point advantage. 10-13.

Molly Waddell started the second quarter with a three-pointer and it sparked a phenomenal run from Fury as Rutter added her second three-pointer and Waddell followed it with another as a 9-0 scoring run gave their side a 12-point lead.

An even period followed after Loughran and Leah Tervit Stark halted Fury’s momentum. Both teams kept the score sheet rising before Rocks embarked on their first scoring run of the game, 7-2, to slash Fury’s cushion to three points at the half. 25-28.

Lady Rocks started the third as Fury had started the second, embarking on a 9-0 streak – including six consecutive points from Dunsire – to open up a six point advantage. Rocks’ defence proved to be the difference in what was a key period of the game as they held Fury at bay for more than six minutes.

Rutter eventually managed to find a way through Rocks’ defence, followed up by McEwan as Fury took their turn to try and reduce the deficit, which was now just two points. Waddell and Rutter exchanged baskets with Dunsire and Emma Kerr, the latter scoring a three-pointer, as both teams fought to create an advantage. A Ciara Burns three to end the third gave Rocks a six-point cushion heading into the final ten minutes. 42-36.

It was Rutter and Melrose who were causing all the damage for Fury in the final quarter, with Dunsire and Loughran doing the same for Rocks. Loughran added eight points in quick succession and Rutter scored two further three-pointers for Fury as the Grangemouth side struggled to make a dent in Rocks’ lead.

McEwan added what turned out to be Fury’s final basket of the game before an 8-0 scoring run from Rocks saw the Cumbernauld-based side over the finish line and gave them a comfortable 12-point margin of victory. 62-50.