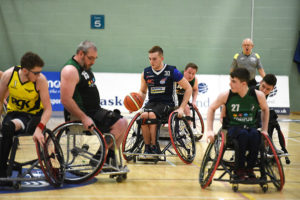 The West All-Stars picked up the 36-55 victory over East All-Stars in the CliniMed-SecuriCare wheelchair exhibition game held during the SBC Scottish Cup Finals last weekend.

The opening minutes were dominated by the West as they went on an 10-0 scoring run with scores coming from across their team.

Conor Smart (12 points, 15 rebounds) got East’s offence going late in the first. The offence continued to flow on both ends as West continued to extend their lead. A late flurry of baskets from Smart, Luke Pearce and Josh Manson brought it back to a nine-point game. 8-17.

The West went on another 5-0 streak courtesy of Adam Donnachie and a three-pointer from Ben Leitch (17 points, 10 rebounds, 9 assists.) The trio of Smart, Austin McKenzie, as well as Thomas Boers, did their best to prevent the West from growing their lead.

Costly fouls from the East sent Ronnie Cassels (10 points, 9 rebounds) and Leitch to the line where they pushed their team further ahead. Both teams traded baskets for a few minutes until Leitch, Jose Alexander and Steven Ross all scored consecutively to give West a 15-point lead going into half-time. 22-37.

The third quarter was a low-scoring but fairly even period. Both Cameron Watson and Davie Steele got their names on the scoreboard to further extend West’s lead.

The duo of Boers and McKenzie responded to give East some momentum heading into the fourth. 28-44.

Both teams once again traded shots back and forth. However, at this point West had a clear advantage over their opposition due to the dominance they displayed throughout the game.

Despite the best efforts from Ben Flanigan, it was the West who saw out the game by scoring five points without reply. A couple of late jump shots from Leitch and Watson meant that the West All-Stars secured the win at Lagoon. 36-55.