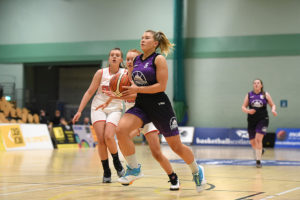 City of Edinburgh were crowned U16 Women’s SBC Scottish Cup Champions on Sunday after securing a 51-72 win over Sony Centre Fury at Lagoon.

City of Edinburgh won the tip courtesy of Aoife Loftus (18 points, 15 rebounds) and immediately got the upper hand as Sofia Amis (13 points, 9 rebounds, 7 assists) nailed a couple of free throws. This was the start of a 0-6 run for Edinburgh before Fury’s captain, Emily Melrose, and Abby Reid (13 points) responded for their side with the latter nailing back-to-back three-pointers. From then on, both teams traded shots back and forth as Fury had a one-point lead in the opening minutes.

The constant offences and gritty defence continued to be on display. Top scorer of the game, Alex Murray (26 points, 12 rebounds, 9 assists) drained a three-pointer for City of Edinburgh to give her team a one-point advantage as the first came to a close. 16-17.

The tempo of the game remained the same as the second quarter began as both teams went neck-and-neck. This was until Edinburgh embarked on a 5-0 run as Murray and Loftus continued to demonstrate their offensive prowess.

As half-time drew closer, City of Edinburgh once again went on a scoring run as they extended their lead by nine without a reply from Fury. Reid eventually answered as she made both free throws from the line. Iona Goldie made a lay up in the last play of the quarter to ensure Edinburgh had an 18-point lead heading into the half. 24-42.

Fury were able to get back into a good offensive rhythm during the third through Darcy Dewar, Melrose and Reid. This revamped offence saw Fury trading shots with City of Edinburgh, although they were unable to reduce the lead Kats had amassed in the second quarter.

Murray and company continued to cancel out every Fury score for Edinburgh. Despite this, the Grangemouth-based refused to give up as the two teams once again traded offences. With two seconds left on the clock Fury’s Chelsy Hughes nailed a three-pointer to reduce the deficit to 15 at the end of the third. 43-58.

City of Edinburgh went on another 6-0 run at the start of the fourth before Fury’s Emily Dagger replied with a three-pointer, following it up with a driving layup to repair the damage of Kats’ streak. This prompted responses from Edinburgh’s Amis and Loftus.