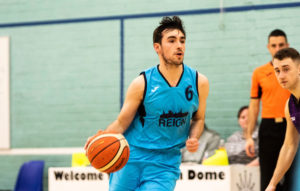 Dunfermline Reign improved their season record to 11-3 this weekend, recording a 77-66 win over City of Edinburgh Kings and moving up to second in the Soho Wealth SBC Senior Men’s Division. The win keeps their chances of defending the League title alive as a three-horse race emerges with St Mirren and Sony Centre Fury.

The game started strongly with both teams keeping the score close in the opening minutes. Seven points from Reign’s Eric Potts (12 points) helped the home side take a marginal lead.

However, Kings were not going to give up that early and were hot on their tails. Showing off their strong shooting abilities, the visitors came out hitting back-to-back threes, finishing the quarter just one point behind Reign. 17-16.

Heading into the second quarter the two teams were trading baskets.Bruce Taylor (17 points) hit back-to-back three’s, as well as several nice finishes around the rim, to record eleven points in the quarter and help Reign maintain their lead.

Kings kept themselves in the game by fighting their way to the basket and using their height to their advantage. Konrad Kantorski (12 points) helped his team by finishing well around the basket to end the quarter just four points behind Reign, meaning it was all to play for in the second half. 39-35.

Reign took off in the third quarter, the home side recording a quick seven-point streak. Jake Sirrell (14 points) and Callum Knox (11 points) both fought hard to get to the rim, helping their team extend the lead from four to 14 points.

Ryan Armour (20 points) became the bright spark for Kings’ offence, hitting a three and back-to-back twos, giving the team seven points. Reign’s intense defensive pressure kept the visiting team to only 13 points in the third quarter however, as they took a double-digit lead into the fourth. 62-48.

Reign continued strongly in the final quarter with the help of Sirrell’s seven-point scoring run. However, the home side felt the pressure of King’s full court press, being forced into making a few bad decisions as the Edinburgh-based side fought for a lifeline

Kings Captain Ali Mackay (14 points) helped his team fight back in the final quarter, bringing in 8 points, although the late flurry wasn’t enough for the visitors as it was the Fife-based side who walked away with the win. It was a strong team display from Reign, who showed the depth of their squad  as five of their players recorded double digits. 77-66.