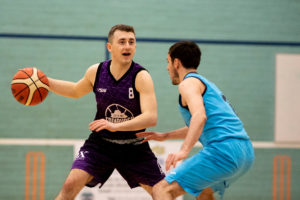 The Soho Wealth SBC Senior Men’s division is heating up as three teams battle it out for top spot in the Championship standings.

Dunfermline Reign keep their hopes of back-to-back league titles alive with a win over City of Edinburgh in this weekend’s Soho Wealth Game of the Week. It was close for the majority of the game with the two teams trading baskets often, resulting in just a single point separating the teams at the half. But it was the home side who walked away with the win after an explosive third quarter, ending the game 77-66.

Ayrshire Tornados and Boroughmuir Blaze met at Troon this weekend, as the Edinburgh side kept their momentum from the Cup Final win as they claimed the victory. 60-100

Perth Phoenix picked up their third win of the session against Edinburgh Lions, after a close game which resulted in only 4 points separating the teams. The win was big for Phoenix, as it helps them to retain a position in Division 1 next season. 69-65

Glasgow University hosted St Mirren for the final game of the weekend. It was a close game with St Mirren only winning by 9 points. The win for St Mirren helps the team keep their feet firmly at the top of the table, as the fight to finish top of the Soho Wealth SBC League gets closer. 71-80