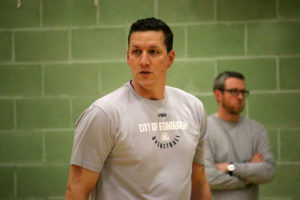 Fury come into the game in prime position, just two wins away from lifting the 2019/20 Championship. Kings currently sit fifth with a record of 8-6. Fury also hold the head-to-head advantage this season, claiming an 84-76 victory in the reverse fixture.

Sony Centre Fury currently sit top of the Soho Wealth SBC, although St Mirren sit directly behind them with an equal record of 12-2. Fury hold the head-to-head advantage, having overcome St Mirren 85-81 on the opening night of the season before falling 83-81 in Paisley, meaning two wins in their final two fixtures will be enough to secure top spot.

Kings will be hoping to end the Championship on a high and restore some confidence ahead of the playoffs, having won just two of five games since the start of the year. The game will also mark the final appearance at Portobello High School for Kings’ Simon Flockhart, who has represented the club for over 20 years.

Kings’ Paddy Campbell admits his disappointment at not challenging for the title, however is focused on claiming a big win for the retiring Simon Flockhart.

“When we saw this fixture on the calendar at the beginning of the season, we were looking forward to this being a potential title decider. Unfortunately it won’t be for us after a difficult spell in which we have struggled in the second half of the season. It still has huge ramifications as Falkirk are still in play for the title, but more importantly for us the game has even more significance in that it will be Simon Flockhart’s last game at Portobello for the club.

Simon is a true legend and inspiration to us, in over 20 years he has won everything there is to win in Scottish Basketball in a trophy-laden career. He has a trophy cabinet most teams would be proud of. His attitude and effort has is unquestionable and he epitomises the never-give-up mentality that we need to adopt to become a successful team.

I can think of no better way of honouring Simon than by signing out with a win against our great rivals Falkirk, followed by a strong playoff push to give him one last trophy for that cabinet!”

Sony Centre Fury’s John Bunyan is expecting a tough test and has called on the Fury’s support to back the team:

“We will be looking to maintain the form we showed last week against Reign. We produced some excellent offence and solid work on the defensive end. With two road games to finish the season, both Kings and Blaze will provide strong tests for us. Kings match us well in all spots and the home game win we had could have gone either way. There is great chemistry in our side and a real professional attitude in terms of how the players train and approach games.

I hope a lot of our fans can make the trip to the capital as our team feeds of their support. I am sure it will be a great game with a lot of quality basketball from both teams – looking forward to it.”

Supporters are encouraged to head along to Portobello for what is set to be an exciting fixture.