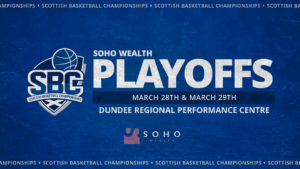 The weekend of action will see a total of nine games played across the two days as the six Soho Wealth SBC Playoff Finals are joined by the two U14 SBC Scottish Cup Finals and a WBBL fixture between Caledonia Pride and Newcastle Eagles.

The new multi-million pound Dundee Regional Performance Centre is set to host one of basketballscotland’s national events for the first time, having been opened by Scotland’s First Minister, Nicola Sturgeon, late last month.

The facility includes an eight court multi sports hub building with spectator seating, a strength and conditioning suite and a state-of-the- art-sport science suite. basketballscotland’s show court will be set up within the hub for the weekend for spectators to enjoy the Finals.

As well as the Soho Wealth SBC Playoff Finals, a number of other events will be held at the new Regional Performance Centre throughout March, including both Chairman’s Cup finals, the CliniMed-SecuriCare SBC Scottish Cup Final, Schools Cup Finals and Jr. NBA Final Fours.

Graham Shaw, basketballscotland’s Competitions and Officiating Manager, is looking forward to hosting the variety of events at the new facility and hopes to see the same atmosphere supporters created at previous events:

“We are delighted to be able to utilise this new basketball facility, with international standard scoreboards and equipment, for a number of events in the coming month.  With both permanent and temporary bleacher seating,  we are able to comfortably host our teams in the finale of the domestic season.

The atmosphere generated over the last few years has been electric and we hope to build on this and engage with the Dundee community to ensure another bouncing weekend of Finals. Hosting the event would certainly not be possible without the support of a range of contributors. We are delighted with the partnership with Dundee Sports and Leisure and the Regional Performance Centre specifically and we are very grateful for their support of the event.”

Tickets for the event are now live, with several ticket packages available over the two days. Saturday sees the day split into two sessions, with day tickets also available, whilst Sunday is covered by a single day ticket. Those wishing to enjoy all nine games over the weekend can take advantage of a weekend ticket.

Entry is free for children under five, although tickets must still be ordered online in advance, with heavily discounted tickets available for those under 12. Under 18s, students and Over 60s are also able to purchase concession tickets.

Supporters can purchase their tickets for the weekend’s action, with 20% off using code ‘EARLYBIRD’, here.