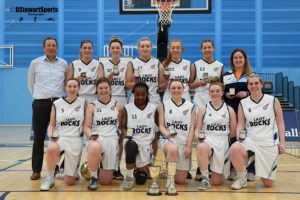 The Soho Wealth SBC Playoffs tip off this weekend as clubs across the SBC aim to take the first step towards Dundee’s Finals on March 28th & 29th.

In the senior divisions, teams have been awarded home advantage based on league position achieved during 2019/20, with all age-group playoffs taking place at central venues.

Quarter-finals are set to be held at The Crags, Lagoon, Grangemouth and St Maurices this weekend, whilst the semi-finals will be held in Dundee next weekend ahead of the Finals later in the month.

Perth Phoenix are already one step closer to their goal of defending their playoff title as they were awarded a bye for their quarter-final v Glasgow City. Lady Rocks Will be aiming to complete a league and playoff double, facing West Lothian Wolves in their opening game.

St Mirren U16 Men are one of three teams looking to complete a domestic treble this season, beginning their playoff campaign against Dundee Madsons. West Lothian Wolves or Glasgow Rens will meet the winner of that game in the semi, as the two face off in quarter-final two.

Lady Rocks, another team on course for a treble, travel to Lagoon for the quarter-finals, starting with a game v Polonia Phoenix. The team also claimed last year’s Playoff trophy, making them favourites in the division.

Stirling Knights, the 2019/20 U18 Men’s league winners, will face Glasgow Rens in their opening playoff fixture. Several of Striling’s squad tasted playoff success in the club’s U16 team last season. Sony Centre Fury are the current holders of the playoff trophy and they play Boroughmuir Blaze in their quarter-final.

Lady Rocks Senior Women are the second side from the club hoping to grab a domestic treble, with  West Lothian Wolves the first opponent in their way. Edinburgh University travel to Perth for their quarter-final.

City of Edinburgh will be hoping to claim the last piece of silverware after being pipped to the post by Lady Rocks in both the league and cup. They face a tough quarter-final, welcoming Sony Centre Fury to Portobello. St Mirren host Glasgow Fever in the division’s fourth fixture.

League winners Sony Centre Fury welcome Edinburgh Lions to Grangemouth off the back of a midweek friendly defeat to BBL side Glasgow Rocks. Cup Winners Boroughmuir Blaze host last year’s playoff winner, City of Edinburgh, in another Edinburgh derby at The Crags.

St Mirren will be hoping to end their season on a high, starting with their quarter-final at home to Glasgow University, whilst Dunfermline Reign host Perth Phoenix on Saturday afternoon.

Supporters can stay up to date with all the results via the basketballscotland website, with tickets for the Finals also available here.

Jr. NBA League 3 Round Up
This site uses cookies: Find out more.
Scroll to top