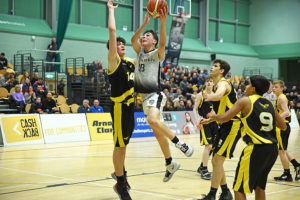 It was an exciting weekend of basketball as the semi-finalists for the Soho Wealth SBC Playoffs were determined. There were some fantastic displays as teams from across Scotland attempted to continue their quest for playoff glory. Excitement continues to build as the semi-finals are played this weekend. Under-16 and Under-18 games will be at the Dundee Regional Performance Centre, whilst the top seeds have home advantage in the senior competition. The Soho Wealth SBC Playoff Champions will be determined on the 28th and 29th of March. With one Senior Women’s semi-final spot still up for grabs, here’s a summary of the action-packed quarter-finals played over the weekend.

Sony Centre Fury and current cup champions, City of Edinburgh will face off against each other in the semi-finals after defeating St Mirren and Highland Bears respectively. Sony Centre Fury won 55-40 with City of Edinburgh comfortable victors, 76-29. In a battle of 2019 playoff versus 2020 league champions, Perth Phoenix will meet Lady Rocks after both teams received buys as Glasgow City and West Lothian Wolves conceded the games.

After a 58-50 quarter-final victory over Glasgow City, St Mirren progress to the semi-finals to meet current league, cup and playoff champions, Lady Rocks. Lady Rocks route was routine after their quarter-final fixture was forfeited by Polonia Phoenix. Perth Phoenix won a one-sided game against Inverness City, 70-44 and will face Sony Centre Fury after they overcame West Lothian Wolves, 63-50 in their quarter-final at Grangemouth.

Sony Centre Fury and St Mirren will clash in one semi-final after picking up respective victories over City of Edinburgh, 50-70 and Glasgow Fever, 63-59. Lady Rocks will be looking to complete the treble as the current league and cup champions paved their way to the semi-finals with an emphatic 100-49 win against West Lothian Wolves at St Maurices. Their opponent is yet to be decided as Perth Phoenix will battle Edinburgh University in the last quarter-final game tomorrow evening in Perth.

Current league champions, Sony Centre Fury ended the playoff hopes of Edinburgh Lions, coming away with a 116-91 win. Boroughmuir Blaze hopes of a cup and playoff double were extinguished after an 82-77 loss to City of Edinburgh. St Mirren and Dunfermline Reign will contest the second semi-final, following victories over Glasgow University, 82-72 and Perth Phoenix, 93-74 respectively.

With the season very much at the business end, you can experience the conclusion, tickets for the Finals are available to purchase here.

Jr. NBA League 3 Round Up