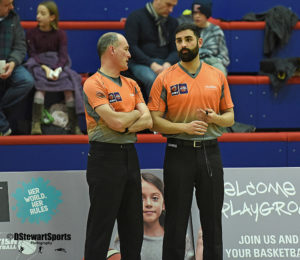 Six basketballscotland officials have been selected to officiate at the WBBL and BBL Trophy Finals in Glasgow on Sunday 15th March.

All four officials in the WBBL final will be representing basketballscotland, as ex-FIBA referee Graham Shaw leads the referee crew of Bartek Rasinski and Nick Nassi, whilst Cammy McLay has been appointed as fourth official for the clash. The appointments are a notable achievement for all four officials, especially Nassi and McLay who are both enjoying their debut seasons within the league.

The game between Leicester and Durham will also see Scottish players taking to the court at the Emirates Arena, with both Claire Paxton and Deanne Hayward playing with Palatinates this season.

Chris Dodds and Iain Macdonald, both of whom currently officiate in FIBA competitions, are joined by EuroLeague referee Eduard Udyanskyy in the BBL Trophy final later that afternoon.

It is not just referees who have been nominated but the finals also sees the table officials and statisticians appointments for both games featuring a number of our Scottish officials including Victoria Macfarlane, Ailidh Hood, Milana Plecas, Lisa Bryson, Cammy Godsell, Toni Carvill, Anton Zhyzhyn, Alex Geddes.

Kevin Pringle, CEO of basketballscotland, is delighted to see so many officials be selected for the double header:

“The officials have all represented themselves admirably in the BBL, WBBL and SBC throughout the season and these are all well-deserved appointments. It’s been fantastic for officiating in Scotland to have so many young referees make the step up to the level of the WBBL and BBL this season and to have six officials appointed to a Finals event is a great achievement. We wish them all the best in their respective games.”

The games won’t be the last of the action for the officials throughout 2019/20, with all set to be involved in the Soho Wealth SBC Playoff Finals throughout the month of March.

Both Trophy finals will be available to watch live via BBC Sport on Sunday: