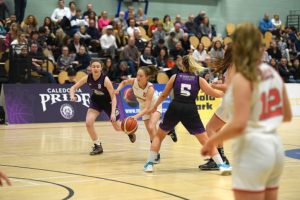 Sony Centre Fury will meet City of Edinburgh for a place in the final, providing a rematch of the recent cup final. City of Edinburgh will look for history to repeat itself whilst Fury will be out for revenge. The other semi-final will pit last year’s playoff champions, Perth Phoenix against current league champions, Lady Rocks. Phoenix will be looking to retain their playoff title whilst Rocks aim to complete the league and playoff double.

Grampian Flyers will look to challenge last year’s playoff champions, Stirling Knights with both teams securing home wins against each other in the league. Cup and league champions, St Mirren will have their sights set on West Lothian Wolves in the second semi-final with a win bringing them one step closer to completing the treble. However, the last time the two sides met in the league; Wolves picked up a tight 73-72 win against them in Paisley.

In a showdown from the West, Paisley-based St Mirren will face Cumbernauld-based Lady Rocks as Rocks look to cement their dominance in U18 Women’s basketball and secure the treble. Perth Phoenix collide with Sony Centre Fury in the other semi-final in what should be a close encounter.

Dunfermline Reign will come face-to-face with St Mirren in what is shaping up to be a thriller. Both teams have one win a-piece from their league encounters so it’s a tight one to call. League champions, Stirling Knights will meet defending playoff champions, Sony Centre Fury in the other semi-final. Knights are looking to achieve the league and playoff double but come up against a Fury side desperate to retain their title.

Sony Centre Fury will welcome St Mirren to Grangemouth in a stellar bout of a semi-final clash. The last time the two sides met in the league it was St Mirren who came away with the five-point win at home. Lady Rocks host Edinburgh University at St Maurices as the home team look to secure another treble.

League champions, Sony Centre Fury and defending playoff champions, City of Edinburgh are set to face off at Grangemouth in an epic encounter. Lagoon Leisure Centre will see a battle between league and cup runners up, St Mirren and last year’s league winners, Dunfermline Reign. This is expected to be an electric semi-final as both teams secured big wins against each other at their respective home venues in the league.

Supporters can stay up to date with all the results via the basketballscotland website. Tickets for the Finals also available here.