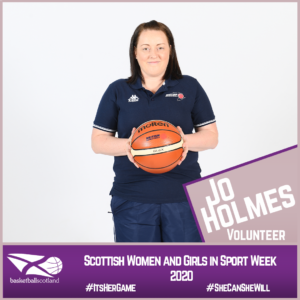 Who are you? What is your involvement in basketball?

My name is Jo Holmes, I come from Derry in N.Ireland and moved to Scotland in 2005 to go to University of Stirling. In my day job I work as a Careers Adviser in Edinburgh and in my free time I play basketball with Edinburgh Lions in the Lothian League, table officiate games for the club when needed and volunteer as a Team Manager with Great Britain Basketball. Recently I was delighted to find out I was appointed as Team Manager with basketball for Team Scotland for the 2022 Commonwealth Games in Birmingham and have just started my training this month.

Why did you want to become a Team Manager? What motivates you to keep doing it?

I got involved as a team manager when I was in my first year at Stirling University. I tore my ACL during a netball match so was not able to do any training or sport for a long time but still wanted to stay involved somehow in sport. At that time I had a few friends that were assistant coaches with the Scotland underage basketball teams and they mentioned that basketballscotland were looking for team managers and things went from there.

I have been volunteering as a team manager now for probably around 12 years. Most of my roles have been with basketball with U15 and U16 Scotland Women’s teams, U16 Scotland Men’s team, U16 Women’s and Men’s Ireland teams, Great Britain U16 Women’s teams and I was also Team Manager with the Scotland Senior Women’s Lacrosse Team for 2 years. These past few months I have been the Team Manager with the GB Basketball U16 Women’s programme and although it was disappointing that the European Championships in Bosnia were cancelled due to Coronavirus, we were still able to organise online sessions with the players and coaches and will now look ahead to planning the 2020-2021 season when hopefully the European tournaments will return again in Summer 2021.

I really enjoy being involved in sport and working as part of a team to support athletes and the coaching staff in their preparations for major games and tournaments. It has been great to be there when players and staff realise their dream of competing at the top level and/or representing their country for the first time. I think as a team manager it is really important to be organised so I am a bit of a geek when it comes to having To-Do lists, spreadsheets, timelines etc haha but I enjoy this so it doesn’t feel like work. While it can be a stressful role at times, it is nice to be able to work in a way that means the coaching staff have peace of mind that their focus is on turning up and coaching and players can focus on their sessions and what they need to do on the court, whether that is for training or in games. It is nice to play a small part in someone’s journey (player or coach) and contribute in a positive way to their experience of the programme and hopefully something they reflect back on positively a few years down the line in their journey.

Tell us about a female role model who has inspired you?

Over the past 2 years I have been following the 20×20 campaign that was set up in Ireland in October 2018 to raise awareness and promote girls and women’s sport and physical activity. The initiative aims to achieve 3 targets by the end of 2020:

It has been great to see so many clubs, athletes, businesses, media outlets etc support the movement and a lot of big names and personalities (both male and female) have really committed to help promote the cause. For example, Shane Lowry, Irish Golfer, committed to wearing the campaigns logo on his gear for the recent Irish Open tournament, replacing one of his sponsor logos. I think there are so many things that can be taken from the campaign, no matter what country we live in. We should always take the opportunities to promote females within sport and physical activity at all levels and roles in hope that we can inspire young girls coming through to get involved and stay involved in some capacity or to get females to re-engage with sport again whether that’s as an athlete, on a social or recreational level, as a coach, an official or even as a spectator. It has been really inspiring and motivating to hear and watch the stories and initiatives that have come out of the campaign and to see it covers everything from grassroots right up to elite level activity and competition and it is hopefully something that will be built on and grow over the next few years.