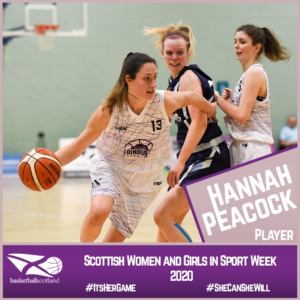 Who are you? What is your involvement in basketball?

My name is Hannah Peacock and I am a former professional and international basketball player. I have represented both Scotland & GB all the way up to senior level. When I was 20 years old I was the Vice Captain of the GB U20s squad and I also made it in to the GB Senior squad during their preparation for EuroBasket. More recently I played for Caledonia Pride, Scotland’s first professional women’s team, until I finished my pro career due to a season with back to back injuries. I now play basketball for City of Edinburgh to keep involved with the sport. I also run my own Strength & Conditioning business providing support to many basketball players and clubs in Edinburgh and the Lothians.

Why do you play? What motivates you to keep doing it?

I play basketball because I not only love the sport itself – fast paced & exciting – but because of the friendships and experiences I gain from it. I have made friendships for life due to basketball and travelled to places I could never have dreamed of going – Malaysia, Thailand, Macedonia, Hungary – the list goes on. I keep playing because I love competition and having something to work towards outside of other areas of my life such as work, as well as developing new and existing friendships.

Tell us about a female role model who has inspired you?

A female role model who inspires me is Serena Williams. Ever since I was young I looked up to her as a strong, confident woman on and off the court. Not only is she one of the most successful, dominant athletes of all time who has had to overcome many barriers in her career, she has also used her platform to discuss body image and racial & gender equality at length and I admire her immensely for that.