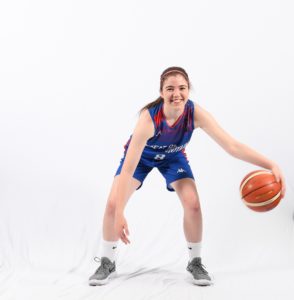 Scottish guard Hannah Robb has been called up to the Great Britain squad for the upcoming EuroBasket qualifier against Poland.

The 22 year old from Arbroath earns her first call to the senior team, having captained the Great Britain U20 team at the European Championships Division B in 2018, having missed out due to injury in 2017.

Whilst aged just 18, Robb earned her first senior caps for Scotland with the team that travelled to the Asia in 2017, featuring heavily in full international games against Malaysia and Thailand as well as matches against opposition from China and Taiwan. At youth level, she captained the Scotland U18 teams at European Championship Division B competitions 2016, as well as having won gold in Division C at U16 and U18 levels in 2014 and 2015.

Robb moved to WBBL powerhouse Leicester Riders this summer, following 4 seasons with Caledonia Pride. Hannah joined Pride in their inaugural season in 2016 and quickly established herself as a core member of the team in her first season, before going on to become the franchise leader in games played, points and steals over subsequent seasons.

Hannah also played 4 seasons with the University of Edinburgh, helping them to the 2020 final of the British Universities and Colleges Sport (BUCS) final, which was unable to take place due to the Coronavirus pandemic.

Prior to this, Robb began her basketball career at Arbroath High School, winning 3 Scottish Schools Cups, which progressed to her playing with Tayside Musketeers at all age groups up to senior and winning the U18 Scottish National League in 2015.

Bart Sengers, who coached Hannah with both the Scotland National Team and Caledonia Pride, was very happy to hear of the call up, saying: “This is great news. Hannah has worked hard to get to this moment and I am sure she will do her best to enjoy it and learn from it. I remember her being in a somewhat similar position when the Scottish senior women went to play in Malaysia. When given the chance she grabbed it and quickly grew as a player, soaking up all the experiences and learning from her more experienced teammates. I am really happy for her and I am confident it will inspire Hannah to continue to get better.”