Pride Win on the Road, as Robb gears up for GB

You are here: Home / Blog / News / Pride Win on the Road, as Robb gears up for GB

Pride Win on the Road, as Robb gears up for GB 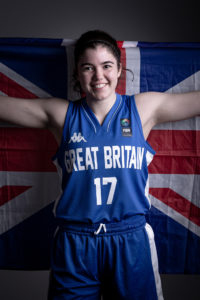 It was a great weekend for Scottish women’s basketball as Caledonia Pride received their first win of the season against Durham Palatinates on the road, ending the game 78-60. Despite this only being the team’s second game of the season so far, the team are showing great resilience, adapting to the challenges being thrown at them and developing as not only individuals, but together as a team. The game also saw Sian Phillips and Pollyanna Storie passing the 400 and 300 points mark for Pride respectively.

One player who has benefitted from developing through Caledonia Pride is GB internationalist Hannah Robb. Now playing for Leicester, Hannah, like Pride, enjoyed a victory at the weekend. She has now joined up with GB and is hoping to step on the court for GB once more tomorrow, as the team take on Belarus in the EuroBasket Women qualifier.

Although now playing for Riders Women, Robb hasn’t forgotten her Scottish roots. “I’ve only played in Scotland and within the Scottish system, which is something I take pride in. Being part of Caledonia Pride from the beginning has been huge for my development. I grew really quickly being in a professional environment and around all the older Scots every day. I’m proud to be the first to come through the Pride program and show the way for other younger Scots.”  See the full article here

GB take on Belarus tomorrow, Thursday 4th, at 11:30am GMT. The game will be live in the UK via FIBA’s YouTube channel.

Caledonia Pride hope to build on Saturday’s win in their next game on the road against Riders Women on Sunday 7th.

Big Game for Pride as GB Qualify for the 2022 FIBA EuroBasket
This site uses cookies: Find out more.
Scroll to top