You are here: Home / Blog / News / A Tough Weekend in the WBBL and BBL for Our Scottish Teams 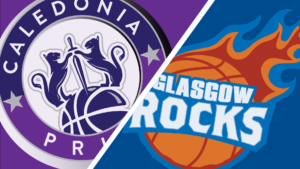 It was a weekend of tough losses in the WBBL and BBL for our Scottish teams. Caledonia Pride took on the Oaklands Wolves at home on Sunday, as they looked to build on their impressive victory against Newcastle last week. Although it was close for most of the first-half, Pride found themselves facing an 11 point deficit at half-time. However, Pride were full of positive intent throughout the second half, narrowing the score to 48-46 midway through the third quarter.  However, despite another double-double by Sian Phillips for the second week in a row with 22 points and 16 rebounds, it wasn’t to be for Pride. The game ended 72-62. Read the full report here

Glasgow Rocks faced Plymouth Raiders in a back-to-back games over the weekend. The first of the two games saw Rocks starting strong, keeping the game close. Despite winning the 1st and 3rd quarter, Raiders had a 3-point lead as they entered the last quarter. With Rocks showing determination and great teamwork, the game was all tied up at 60 with only 60 seconds left to play. Both teams put up a good fight, but ultimately it was Raiders who just managed to grasp the win, 63-60, after three successful 3 throw attempts. Read the full report here

After narrowly missing out on the win in game one, Rocks were determined to get the win at home in game two. There were some positives for the Rocks, including the double-double by centre Ronald Delph with 23 points and 10 rebounds. But it wasn’t enough, with Raiders winning the second of the weekend’s double header, 92-67. Read the full report here

Caledonia Pride will travel to Wales on Saturday March 6th to take on Cardiff Met Archers at 3:15pm.

Glasgow Rocks next play Surrey Scorchers away on Saturday March 6th at 6pm.  Available to watch on the BBL Player – subscription required.