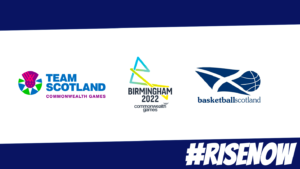 After a record-breaking 4th place finish at the Gold Coast 2018 Commonwealth Games, preparation is well underway for Scotland to compete at Birmingham 2022. There is increased opportunity for Scottish success on the court as wheelchair basketball makes its debut at the Commonwealth Games.

Sports specific selection standards have been developed in conjunction with Commonwealth Games Scotland. Qualification is not certain, and with a change to the 3 x 3 version of basketball, there are obstacles to overcome before we see Scottish teams on the floor in Birmingham.

Basketball has only featured in two Commonwealth Games (Melbourne 2006 and Gold Coast 2018). Gold Coast 2018 was a memorable experience as Scotland defeated England on their way to a best finish for any Scottish team in any event at a Commonwealth Games. The character of the team, desire to work for one another and a never say die spirit were evident throughout the Gold Coast Games.

Head of Basketball, Barry Lang is looking forward to the chance for Scotland to take part in another Commonwealth Games:

“We’re extremely excited about the prospect of participating in Birmingham 2022. The new 3×3 format is fast and furious and we hope to build on our Senior Men’s 4th place at the Gold Coast. The added bonus for this Games is the inclusion of both running and wheelchair basketball, so we get the opportunity to qualify four teams for the event next year. The Selection Policy announcement is the first stage in the process and we’re aiming to engage players, including those based overseas, to highlight our plans.”

Further information will be released regarding qualification when this has been confirmed.