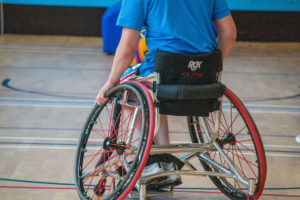 Did you know that wheelchair basketball has been a part of the Paralympics since the very first games in Rome 1960?

The wheelchair game is very similar to the running game (for example, the height of the basket, distance to the foul line, court size etc.) but there is some difference between the two games.

A player can wheel their chair and bounce the ball at the same time, however, if the ball is picked up and placed on the player’s lap, they can then only push the chair twice before they are required to shoot, pass, or dribble the ball again. If the player takes more than two pushes without dribbling, they will be called for a travel violation. Unlike the running game, there is NO DOUBLE DRIBBLE RULE in wheelchair basketball. While in possession of the ball, the player is not allowed to touch the court with their feet.

Every wheelchair basketball player is classified by a point system varying from 1.0 (the most impaired) up to 4.5 (the least impaired). The system is not based on the player’s skill level, but instead on their functional capacity to complete the skills necessary to play – shooting, passing, rebounding, dribbling, pushing, pivoting, and catching.

Each team can consist of up to 12 players of varying points totals. To ensure fair play, the total number of points for a team allowed on court at any time must not exceed a combined total of 14.0 points. If the team has over 14 points on the court, they will receive a technical foul on the coach.

Playing Our Part
This site uses cookies: Find out more.
Scroll to top