You are here: Home / Blog / News / Get Into Summer 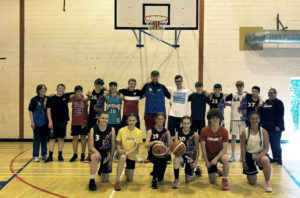 Over the summer, SAMH and Scottish basketball clubs took part in the ‘Get Into Summer’ campaign from Scottish Government. The campaign aimed to encourage young people aged 11 -19 to play basketball, socialise, and reconnect within their local communities during the school summer holidays, and welcome players back into their clubs following the pandemic.

basketballscotland and SAMH supported 13 clubs in total to run basketball sessions with SAMH’s Five Ways to Better Wellbeing incorporated into sessions. The clubs put on three sessions a week for six weeks with SAMH providing a small grant and resources to support the clubs design their sessions to help young people be connected and look after their mental wellbeing this summer and beyond.

When asked about how the initiative had helped the club, Attack Basketball Academy’s Director of Coaching, Ruth Grant, stated “What was great about SAMH’S summer programme was the abundance of resources made available and the support we received from SAMH. I was able to discuss what we’re trying to do at Attack, my concerns, and questions about how to move forward with professionals and feel enabled to develop our programme further, knowing that I can always go back to SAMH for future support. It’s incredibly empowering.

Sport is such a powerful tool in promoting good mental health and in reaching individuals who need more support: I find it tremendously encouraging that SAMH used a multi-sport initiative to reach more people and to educate clubs in the positive impact they can have. I look forward to it being built on in future and am delighted that basketballscotland is taking mental health so seriously through SAMH’s summer programme and its Wellbeing Ambassadors.”

When asked about the initiative, basketballscotland’s National Development Manager, Adam Szymoszowskyj, said the “Get Into Summer [campaign] proved to be an effective initiative that supported our basketball clubs as they looked to bounce back from the pandemic. Developing life skills in connecting with others and mental wellbeing allowed our clubs to make a positive impact in the lives of young people. These skills are more important than ever before as everyone looks to bounce back from the pandemic. In addition, the grant SAMH provided clubs reduced the financial burden faced to run sessions. Given the financial strain clubs and players have faced over the pandemic, it supported getting people back on the court again. Thank you to SAMH for their great support which allowed young people to play basketball again and supported clubs to positively impact the lives of young people.”