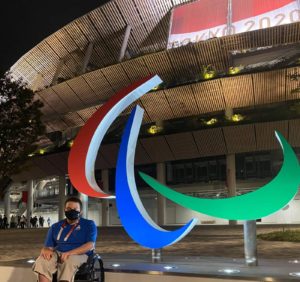 I’ve known Dylan for around 8 years now since he started his talent pathway with our U19 wheelchair basketball Academy, where he represented Scotland at British Wheelchair Basketball’s ‘National Junior Championships’.  His desire and dedication to achieving his best at training also saw him being selected as reserve for the School Games that year.

Dylan overcame many challenges in the lead up to selection including a lack of confidence and self-belief, but he embraced these challenges, learned from feedback always showing drive and determination to achieve his goal – to play at the School Games, this he achieved the following year.

During the long seven-hour coach journey travelling back from the Games, Dylan announced that he wanted to say something, and proceeded to totally captivate us all with his thoughtful and poignant reflections of teammates, coaching & support staff, and the School Games itself.

Dylan certainly has a way with words.  Having studied Journalism at the University of Worcester and more recently completing a Masters at Napier University, Dylan is a regular writer for German sports publication Rolt Magazine, covering European club and international wheelchair basketball competitions, as well as providing live commentary for European and World competitions.

The opportunities basketball present range far more than the on court Xs & Os.  Friendships are forged through camaraderie, teamwork, and basketball develops so many personal skills such as confidence, resilience, independence and enhances self-esteem.  Basketball can also inspire future career pathways, as I found when I went from being Dylan’s coach to being his colleague during his Modern Apprenticeship with basketballscotland.

Every basketballing kid dreams of playing pro or being an Olympian/Paralympian, Dylan has realised his dream of being at a Paralympic Games by being part of the Journalism & Communications Team  in Tokyo!

This is another chapter in Dylan’s Basketball Adventure – can’t wait to hear the stories, think we’re going to need another long coach trip to hear them all!

Proud of you Dylan.