NBA ANNOUNCES THE RETURN OF THE JR. NBA COACHES

You are here: Home / Blog / coaching / NBA ANNOUNCES THE RETURN OF THE JR. NBA COACHES

NBA ANNOUNCES THE RETURN OF THE JR. NBA COACHES 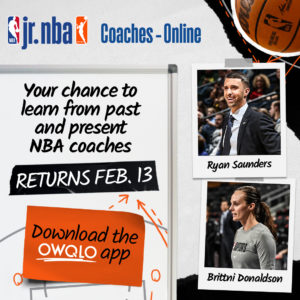 NBA ANNOUNCES THE RETURN OF THE JR. NBA COACHES – ONLINE PROGRAMME PRESENTED BY GATORADE® FOR COACHES AND PLAYERS IN THE UK

The NBA has announced the third instalment of the Jr. NBA Coaches – Online programme presented by Gatorade®, a virtual resource and content platform offering drills, instructional videos and clinics which was originally launched in 2020 and has featured 20 current and former NBA coaches from five countries.  The free programme, hosted on OWQLO, the official Jr. NBA League app in Europe and the Middle East (EME), will feature 12 live virtual coaching clinics from February to September for interested coaches and players in the UK. The programme is also available to fans in France and Italy.

Open to app users 16 years and older of all skill levels and abilities, sessions will include a variety of content offerings highlighted by live coaching clinics moderated by the NBA’s EME Basketball Operations team and featuring a host of current and former NBA coaches.  Gatorade, the world’s number one sports drink and official partner of the NBA, returns as presenting partner of the programme and will support participants with a dedicated hydration and sports nutrition section.

The first clinic on Sunday, Feb. 13 will feature Ryan Saunders, who most recently served as head coach of the Minnesota Timberwolves, followed by a clinic on Sunday, March 27 with Brittni Donaldson, who previously served as an assistant coach for the Toronto Raptors and the Raptors 905 of the NBA G League.  The clinics will also include a Q&A section, allowing participants to interact with and learn directly from the featured coach.  Dates and guest coaches for forthcoming sessions of the Jr. NBA Coaches – Online programme presented by Gatorade will be announced in due course. Clinics will also be archived and available to view on demand on the OWQLO App.