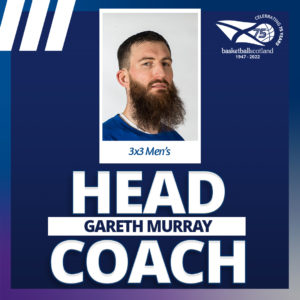 basketballscotland are excited to announce that Gareth Murray has been appointed as the Head Coach of our 3×3 Men’s National Team ahead of this year’s Commonwealth Games Qualifying Tournament.

Murray, who is currently the Head Coach and a key player for the Glen Luss Glasgow Rocks, started his professional playing career with the Scottish Rocks in 2006. Throughout a successful career, Murray has plied his trade across the world, picking up valuable experience and knowledge from a range of basketball cultures.

Murray is no stranger in the Scotland National Team, having competed at both the 2006 and 2018 Commonwealth Games in the 5×5 format. Murray has also been a familiar face in the Great Britain team and has featured in many major tournaments including the FIBA 2013 and 2017 EuroBasket.

This is not the first occasion that Murray has stepped into a coaching role, as he was the Scotland U16 Men head coach in 2017.

Having been the Team Leader for the GBR U18 squad in the 2019 FIBA 3×3 Europe Cup Qualifier, Murray already has vast knowledge on this format which he hopes to bring to the court later this year.

Speaking on his appointment, Murray commented “Pulling on the Scotland jersey has always been a proud moment for me, from the first time back in 2000 at under 16 level until now, 22 years later. I am honoured to have the potential to play in three separate Commonwealth Games. I hope I can help grow and inspire the next group of players to achieve their goals.

With the 3×3 format being such a unique competition where the coach cannot interact with the team during play, I feel there is an additional advantage with me playing.

Being named head coach for the Scotland men’s team is a privilege and a fantastic opportunity for me to use the experience and knowledge I have gained from playing in major tournaments over the years.”

basketballscotland’s Head of Performance, Barry Lang, commented “I’m proud to announce that Gareth Murray has been appointed Head Coach of our 3×3 Men’s National Team. Gareth commands respect on and off the court, having competed for Scotland and Great Britain. As a professional player and coach, Gareth continues to showcase his basketball IQ week in, week out. He was also appointed Team Leader for the GBR U18 3×3 programme a few years ago, so he has a unique knowledge and experience of this format of our game.”