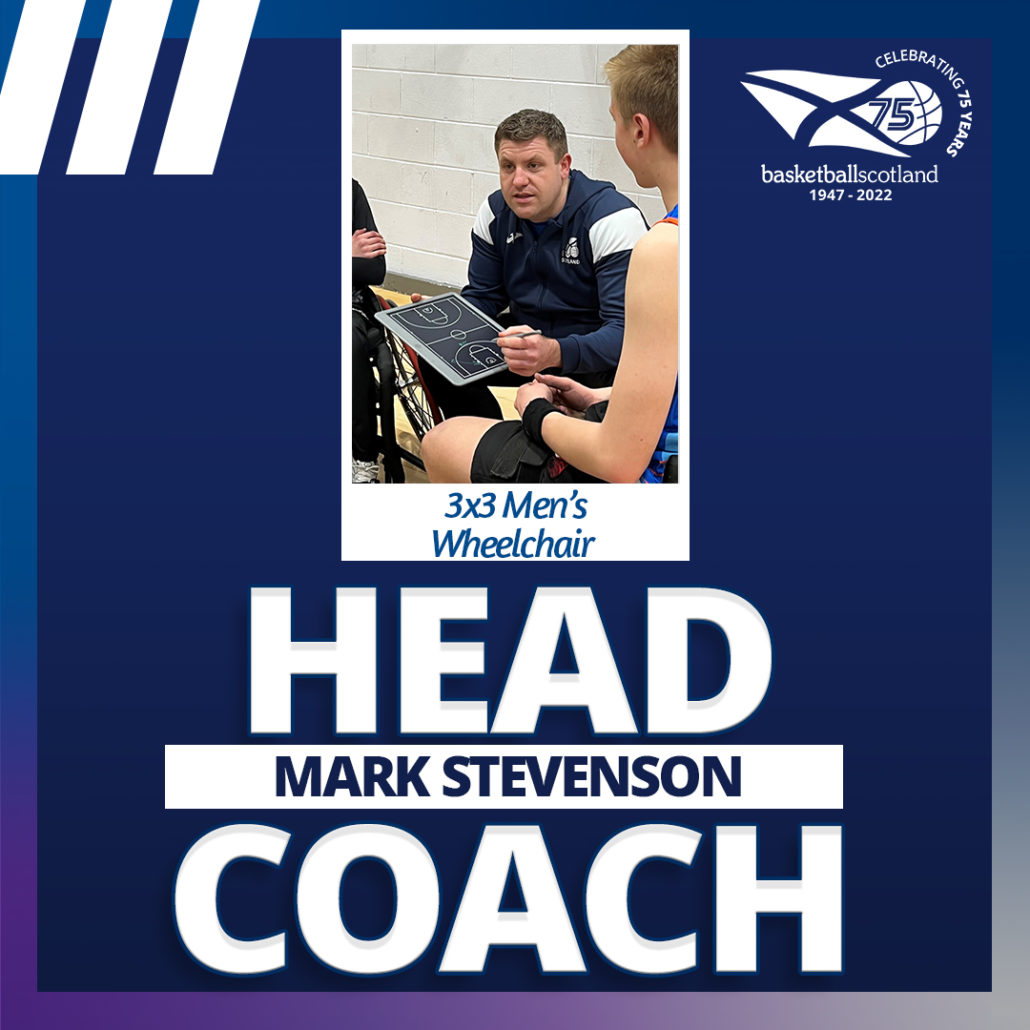 basketballscotland are happy to announce that Mark Stevenson has been appointed as Interim Head Coach of our 3×3 Men’s National Wheelchair Team.

Stevenson will work with the team as they prepare for the 3×3 Commonwealth Games Qualifying Tournament, which is set to take place later this year after being postponed due to the pandemic at the end of 2021.

Before coaching, Stevenson started his wheelchair basketball career playing, where he represented Scotland with the U25s in the first two Celtic Cup competitions. He also played for Lothian Phoenix in British Wheelchair Basketball’s (BWB) National League Division 2, where he helped the team gain promotion to Division 1.

Stevenson, who was awarded basketballscotland’s Young Coach of the Year in 2011, received his first Head Coach appointment in 2012 with the U19s at BWB’s National Junior Championships. He is well known within the wheelchair basketball community having coached Scotland’s U18s, U19s and U23s teams at different points since 2012. He has coached at five BWB National Junior Championships and as well as four UK School Games.

More recently, Stevenson has been a part of basketballscotland’s Talent Development Programmes and coached the National Development Squads and National Squads.

With seven wheelchair Scottish Cup Finals, six running Scottish Cup Finals and four basketballscotland National League Playoff Finals under his belt, Stevenson is looking forward to bringing his depth of knowledge of the game to the commonwealth team.

“I am very excited to take up the role of Men’s Head Coach. For me, there is no greater honour than representing your country as a player or a coach, so I am a very proud Scot today to be working with such a great bunch of players.” Commented Stevenson. “We have a very hard-working team and staff who are all working together to achieve great things. The Commonwealth Games is one of the highest events we can represent Scotland in, so we are aiming to grab this opportunity with two hands and give our all to make the country proud.

basketballscotland’s Head of Performance, Barry Lang, commented “Mark has been a longstanding member of our wheelchair coaching community and we’re delighted that he has taken on this opportunity. He knows the guys in our depth chart having coached many of them throughout his time as an age group National Team Head Coach. The qualification tournament will allow us to showcase the 3×3 discipline and for Mark to prepare and lead our team a major event.”