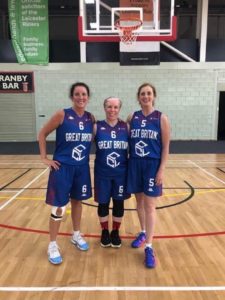 Six Scots are set to represent Team GB at the upcoming FIMBA European Championships, which are set to take place in Malaga, Spain, from June 24th to July 3rd, 2022.

GB Maxibasketball (GB Maxis) is a high-quality performance programme for players aged 35+ years and over, who are looking to continue their love for the game by competing against players of their own age and representing their country at elite level.

Speaking on her selection, Ann Jamieson commented: “It’s always very special to represent Scotland and GB, and I am proud to say that I have done so many times. I had no idea back in 1985 when I first represented GB at the World Student Games in Japan, that I would be holding the GB back court again with Sadie Mason in 2019 at the World Maxi Championships in Finland. I feel honoured to play with an amazing group of women that include my ex-Scotland teammates Shirley Campbell and Elaine Brechin Montgomery, as well as those I played with and against in a 25-year career in the English National League. I feel blessed that my body and mind still allow me to do so.  I’m so looking forward to Malaga 2022, and it’s fabulous that another Scot, Shirley White, has been selected too!”

Watch this video to see what it means to some of the players to be selected to represented GB.

Click here to help support the Women’s team and here to support the Men’s teams as they get ready to head Malaga to fight for a medal.