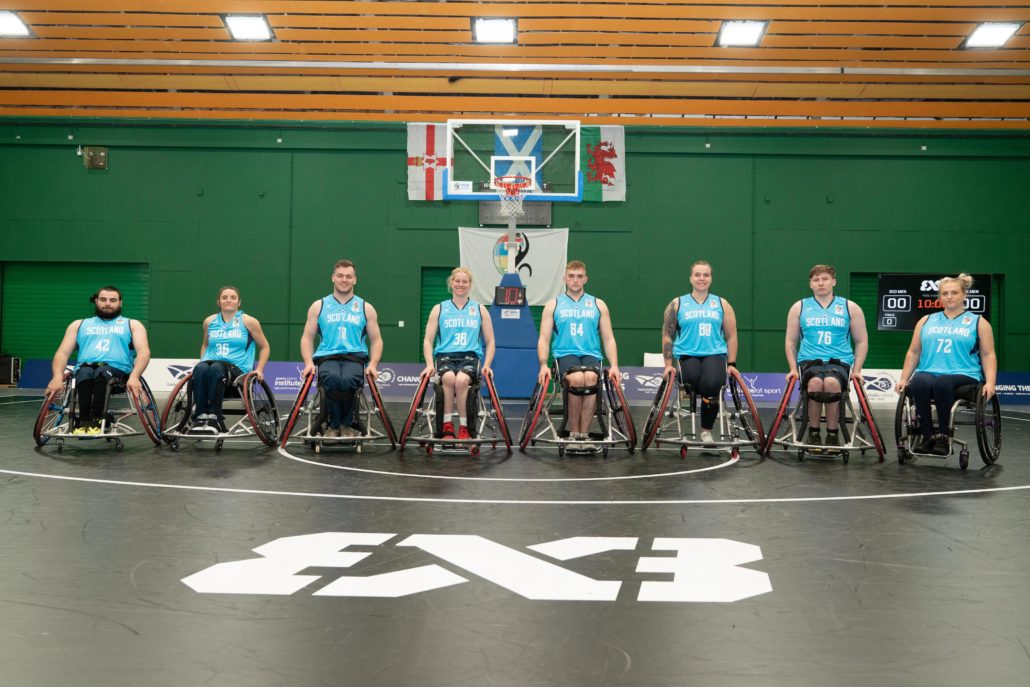 The opportunity to represent Scotland at an international level is rare, especially for the wheelchair game. Therefore, after it was announced that Wheelchair Basketball was to feature at the 2022 Commonwealth Games, Scotland was ready to fight for its place.

The sportscotland performance centre at Inverclyde was once again the host for the European Regional Qualifying tournament, having hosted the running tournament the pervious week. Teams from Scotland, Wales and Northern Ireland took to the court to compete for one place at Birmingham 2022.

From the get-go, there was only one thing in our players’ minds. Win the tournament and you are heading to Birmingham.

The men were first to the court where they faced Northern Ireland. Scotland was first on the leader board but was closely followed by a free throw from the opposition. Despite both teams keeping it close trading baskets, it was Northern Ireland who eventually took the game after 10 minutes had elapsed, 12-14.

Scotland Women were up next for their first of three games against Wales. The team started strong, and they were quick to get some points on the board. The “Come on Scotland” chants rang through the hall. It was clear from tip that Jude Hamer, Lynsey Speirs, Jess Whyte and Captain Robyn Love (all Loughborough Lightning) have the close bond and trust that you only get from being teammates on a daily basis. The game ended when Scotland made it to the 21 point mark after a basket from Whyte. (21-4)

Round two of Scotland Women v Wales went very much the same as game one, with the teamwork between Paralympian’s Hamer and Love shining throughout. During a stop in play while medics attended to an injured Wales player (who we spoke to after the game and is OK), the team took the opportunity to talk tactics and soak in the atmosphere of a home crowd before going onto win 17-3.

As the Scotland Women took to the court for the final time against Wales, a perfect performance saw them win the game 21-0, and the dream of going to the Commonwealth Games became a reality. The emotions clearly visible from all four players and they hugged each other, posed with the Scotland flag and thanked their supporters.  Love, who has often spoken of her desire to one day represent her home country, was visibly holding back the tears as she went to be interviewed – Scotland flag draped around her shoulders.

After the excitement of watching Scotland Women qualify for the commonwealth games, our Men were determined to do the same. The game started shaky. It was clear to see the nerves from both teams. After a close game, with only a few seconds on the clock, Scotland found themselves at the line for one, with the score sitting at 8-9. It was simple. If Captain Leitch made the basket, we were going into overtime, miss and Northern Ireland would take the win. As Leitch readied himself for the shot, the crowed fell absolutely silent… Which only made the roar that followed the shot sound the loudest of the night by far as the game tied up at 9-9.

Overtime in 3×3 is not based on time, but rather points. The first to score 2 points takes the win, no matter how long it takes. Scotland, seeing their chance of qualifying just at their fingertips fought to secure the first basket. Closely followed by one for Northern Ireland. Scotland back with the ball, but just couldn’t quite make the shot which saw Northern Ireland with the opportunity they needed and successfully got their second shot, winning the game.

basketballscotland is incredibly proud of all our players. The determination and dedication you have shown throughout both qualifying tournaments, we couldn’t have asked for more.

We would also like to thank sportscotland’s National Sports Training Centre, Inverclyde, for being incredible hosts to us over the two weeks. Northern Ireland and Wales for making the journey and helping make the tournaments as exciting as they were. And finally, the Scottish basketball community – thank you for getting behind our teams. Your support was felt every step of the way.

Catch up on all the action, excitement and heartbreak from the night here.