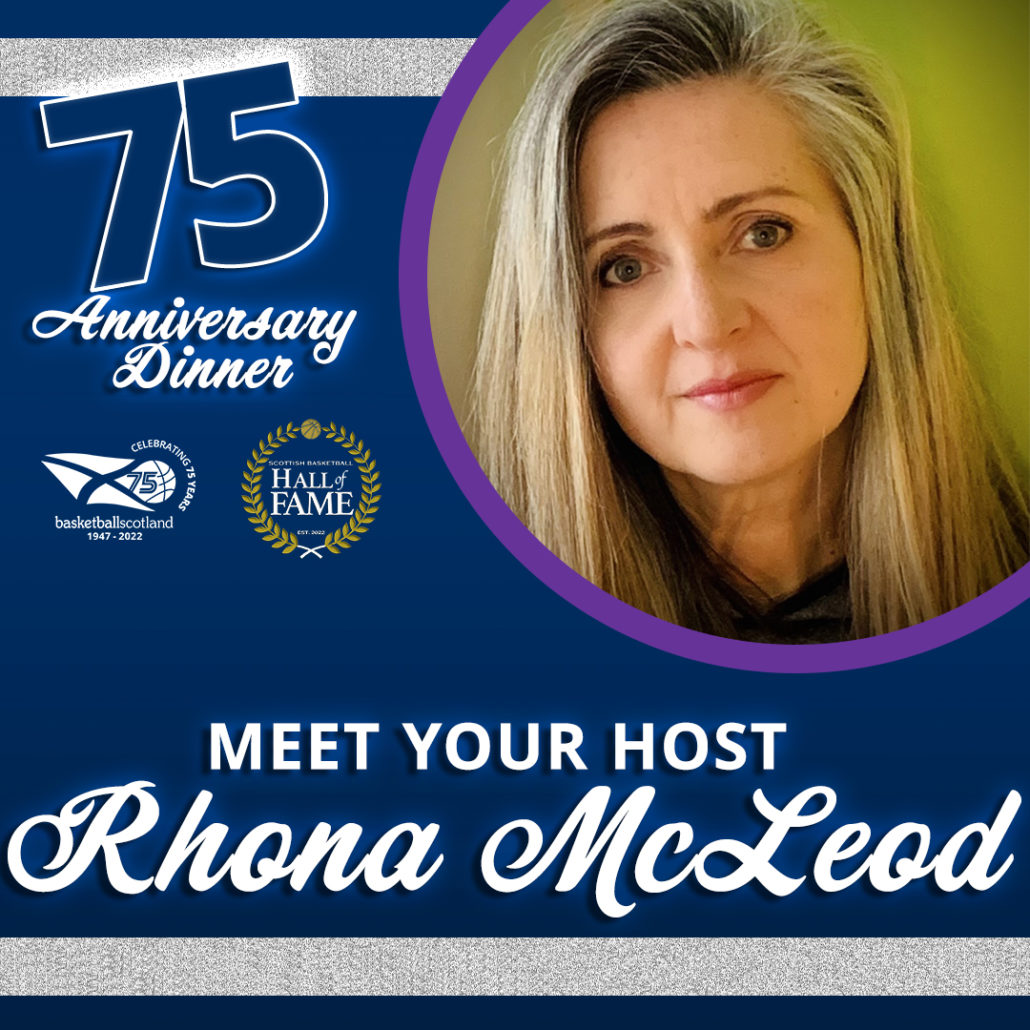 basketballscotland is thrilled to announce that Rhona McLeod will be hosting our 75th Anniversary Dinner. The dinner, which is set to take place at the Edinburgh International Conference Centre on June 18th, will celebrate all that is Scottish basketball and will recognise those that have made an impactful contribution to the game by holding the first ever Scottish Basketball Hall of Fame induction ceremony.

Rhona is one of the most familiar faces on Scottish Sports broadcasting having regularly presented the Sport on Reporting Scotland for 21 years. She first cut her teeth in TV at the World Cup France 98 and continued, covering five Commonwealth Games and  two Olympic Games for BBC Scotland. In addition she has written, produced and presented the documentaries Gambian Goals – A Donkeymentary for a series of Make Poverty History programmes. She also produced and presented the first television interview with the former Tour de France rider and King of the Mountains Philippa York. Rhona is the recipient of a Royal Television Society Award for Sports News journalism.

In May 2019 Rhona left BBC Scotland to form her own media company McLeod Media. She has had a happy and fulfilling time working for notable clients including World Athletics, Olympic Channel News, UK Athletics, Scottish Rugby, The LTA and sportscotland. In this time she has reported and presented from the 2020 Winter Youth Olympics in Lausanne, World Athletics Relays in Poland, Tokyo Olympics 2020 and the World Athletics Indoor Championships 2022 in Belgrade.

Rhona is a former international long jumper and now proud athletics Mum of her two daughters who are junior international athletes in their own right. It’s a little known fact that Rhona and her husband Bruce hosted the Glasgow Rocks playing squad for Christmas Dinner in 2006.

The theme of our 75th Year is ‘Celebrating the Past, Present & Future’. On the night there will be a chance to contribute to a Youth Development Fund, ensuring any money raised on the night stays within basketball in Scotland.

It is set to be an exciting evening with a 3-course meal, drink reception, a raffle and auction, and of course, the first ever Scottish Basketball Hall of Fame induction ceremony!

*** 20% deposit is required to secure your table/ticket