Scottish Basketball Hall of Fame – Meet The Class of 2022

Scottish Basketball Hall of Fame – Meet The Class of 2022

On Saturday, June 18th, the first 11 people were inducted into the Scottish Basketball Hall of Fame. On a night of celebration, these incredible individuals were recognised during basketballscotland’s 75th anniversary dinner.

Throughout the decades, Scots have been successful in basketball across the world. Performing in the NBA, the Olympics and Paralympics. The Hall of Fame recognises the achievement and effort of those at the highest levels of the game.

During the summer of 2021, the basketball community sent in many nominations on who they thought should be inducted into the Scottish Basketball Hall of Fame. A select group of Scottish basketball experts were then selected to discuss, debate and determine who was worthy of a place in the Hall of Fame.

Meet the 2022 Inductees below 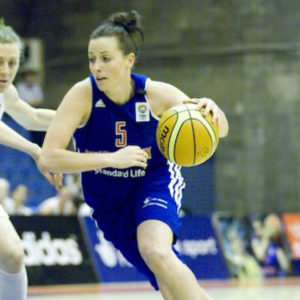 Rose Anderson is the first Scottish women to play basketball in the Olympics. Rose started with the City of Edinburgh club and it wasn’t long before she was representing Scotland. Firstly at U16, then U18 and on to senior level. Alongside playing for Scotland, she won many national titles and Scottish Cups.

In 2006 a scholarship in Oklahoma beckoned. First with Northern Oklahoma College and then with the University of Central Oklahoma. Success in the States dovetailed with Scotland and GB appearances, including being captain of GB under 20s. She was also selected for GB at the London 2012 Olympics. 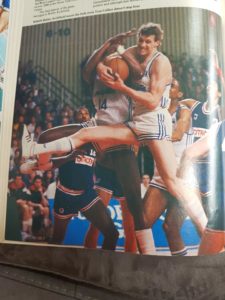 Not to be outdone by his son, Bobby Archibald is far more than just the father of Scotland’s only NBA player. Bobby had an impressive basketball career of his own. Starting at Paisley, his talent attracted the interest of Murray International where Bobby was a core part of the Scottish backbone to the team. Bobby starred throughout the 80s and was heavily involved in some epic European basketball clashes, including playing against Tracer Milan and Split. His impressive club career was complemented by captaining both Scotland and GB. This included Bobby playing in the Olympic qualifying tournament in 1984. Both Bobby and his son Robert, at various stages played against the great Toni Kukoc. 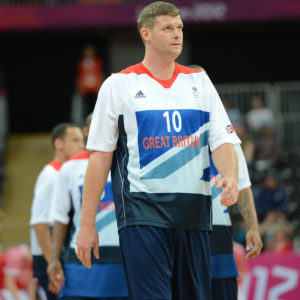 Robert Archibald remains the only Scot to play in the NBA. Starting his basketball with some illustrious team mates at Dunfermline Reign, Robert won league and cup doubles in Scotland before his incredible career went Stateside. Reaching the NCAA Final 4, with University of Illinois, Robert was drafted number 30 in the NBA by the Memphis Grizzlies. His time in world’s premier basketball competition also saw him feature for Orlando Magic, Phoenix Suns and Toronto Raptors.

Robert also had success in the Euroleague and on the international stage. His many GB appearances included playing at the London Olympics.

There has been no Scot to achieve what Robert has. He remains the figurehead of Dunfermline Reign and is an inspiration to players all across Scotland. He has shown that it is possible to make it to the highest level of the game. 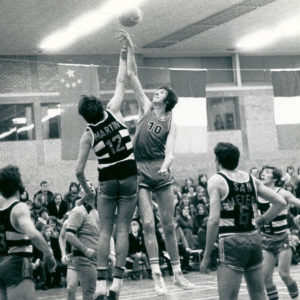 Willie Cameron is another who has devoted their life to basketball. And continues to do so. In fact, Willie credits his introduction to the game to our last inductee, Sam Dunn.  In his own words: “My Basketball journey began in 1964 when coach Sam Dunn brought me as an absolute beginner to the powerful Pearce Institute club in Govan. I was fortunate to develop under the tutelage of Sam and the watchful eyes of the club’s senior international players”

A move to Penilee (which later became Paisley Basketball Club) saw Willie Cameron gain national league experience and develop under the watchful eyes of Norrie McCrae and Ron Mather. Next, it was down to London to join up with Crystal Palace and experience domestic success and European Cup action.

Alongside, national honours beckoned. A debut versus Iceland in 1969 was the first of 55 caps over the next decade. There were also 25 GB caps including performing at Olympic qualifying tournaments in 1972 and 1976.

On his return to Scotland, Willie continued playing for Paisley Doigs until injury ended his playing days.

However 40 years ago he teamed up with James (Mickey) McKechnie to set up what became Glasgow City Basketball Club. Operating from the East End of Glasgow this club and the charity they also set up continues to have an amazing impact on the local community.

Showing the inclusivity of basketball, Willie has sent teams to the Special Olympic World Games and continues to provide opportunity for those with learning disabilities to get active.

Willie has given an incredible amount back to a game that gave him so much. 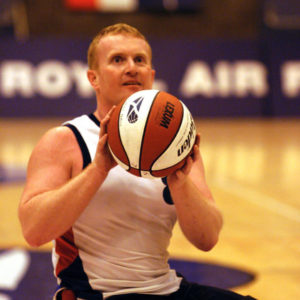 Gary Davidson has had a spectacular wheelchair basketball career and continues to be heavily involved in the game. Gary first played the sport aged 12, he was an international by 15 and went on to amass an impressive 89 caps for Great Britain. This included an appearance at the 1984 Paralympic Games where he shot the winning basket against France, the defending champions.

In the club game, Gary starred for a number of clubs, including Team Thistle, Birmingham Bullets, Dublin Celts and West of Scotland Wheelchair Sports Club. His career included. Whilst playing with West of Scotland, they won the “international spitfire” tournament in Canada. To this day, Gary remains the tournament’s Top Points Scorer.

A talented sportsman who also competed internationally at swimming, table tennis and wheelchair rugby 7s, Gary has had an enormous impact on wheelchair basketball. Not just through his playing career, or just in Scotland with his current role at Glasgow Rollin Rocks and coaching in the National Academy, Gary was also integral to establishing wheelchair basketball in the country of Georgia. 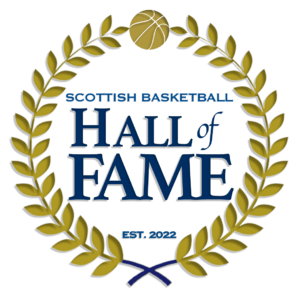 Sam Dunn had a vital role in shaping basketball in Scotland. Winning his first Scotland cap in 1951, Sam was a founding member of the Outram Press club in 1947. By 1952 Sam was captain of Scotland. By 1957 he was coach as well as captain at the European Championships in Sofia.

Domestically Sam fulfilled the role of coach and captain at Outram Press from 1947 – 1955. Then became coach, captain and co-creator of the Elite club. Success followed with 5 Scottish Cup and 5 League titles before he moved on to the Pearce Institute Club in 1958.

Although forced to retire from playing in 1960, Sam crammed a lot in with many appearances for Scotland and plenty of domestic success. 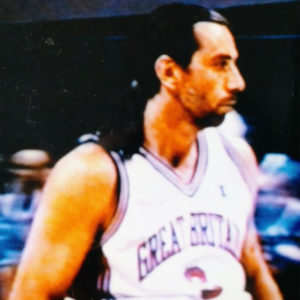 Relatively late to the sport, Calum Gordon was quickly identified as a player with great potential. Starting with Team Thistle, he moved to Sheffield Steelers and was called up to the GB team for the Paralympic Games in Seoul. Here he won the first of his 104 officially recognised caps, although there are several more from additional tours with GB.

After Seoul, Calum played in a further 2 Paralympic Games, winning silver at Atlanta in 1996. He has also won a silver at a World Championships and 5 medals from European Championships. On an individual level, Calum was selected in the World All Star Squad in 1996 and won the British Wheelchair Premier Division MVP 3 times. Whilst playing with Sheffield Steelers, Calum won the Premier Division title on at least 5 occasions. With Steelers, Calum also had success in European Competition, winning the Champions Cup in 1994 and finishing second in 2002.

Anna Herman was a leading player for Auld Reekie in the 1950s, she was a starring member of the team that won an incredible seven consecutive Scottish Cups. Anna performed on the international stage too, travelling with the Scotland team to play in the European Championships in Prague in 1956. 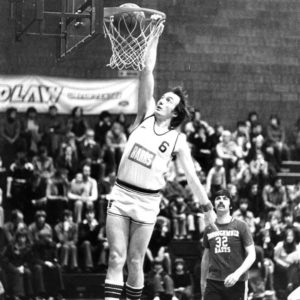 Bill McInnes devoted his life to basketball. And what success he had, in particular on the court. Bill played a staggering 49 consecutive games for GB. For the majority of these, he was captain. Whilst representing Britain, he was leading scorer in the 1968 Olympic qualifying tournament. He also played the qualifying tournaments for the 1972 & 1976 Olympics.

Alongside GB appearances, Bill played a phenomenal 127 times for Scotland.

In the domestic game, Bill was a key cog in creating and administering Boroughmuir Blaze. It was with Boroughmuir that he won 9 consecutive Scottish Cups. They were also the first Scottish team in the European Cup. In Round 1 they were drawn against the formidable Real Madrid. What a moment for Bill, his teammates and Scottish Basketball.

Never fully retiring, Bill continued to play Masters basketball. Passionate about basketball, he served as Chair of basketballscotland for an impressive, or foolish, 18 years, from 1990. And then Chair of GB until 2016.

In a nice quirk, Bill was the first player to win the English Player of the Year, in 1971. During that season Boroughmuir won the British title.

Charlie Robinson played for both Scotland and GB, after starting his career at Maryhill. After a couple of years at Outram Press, in 1955 he was integral in setting up the super club, “Elite”.

International recognition followed, playing in many Scottish games, including the European Championships in 1957. His performances for Scotland saw him feature in the GB Olympic team in 1960 before captaining the team in 1964.

Not one to shirk from a challenge, apparently he once applied to be a sparring partner for Muhammed Ali.   “to find out whether that guy could take a punch”! 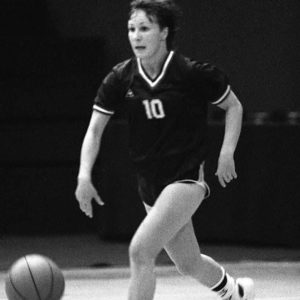 Nicky Smith is the first Scottish women to earn a scholarship to play basketball at a college in the United States.

From Holyrood High, Nicky captained Scotland Schools, before going on to captain the Scotland senior team. Nicky also represented GB at qualifying tournaments for the 1980, 1984 and 1988 Olympics.

Nicky made an immediate impact in the States. During her time at Weatherford College, she captained the team and was selected in the all region team. She was then an all-American during her time at Texas Wesleyan University, where, again, she was captain of the team.

The ultimate team player, whilst at university in America, Nicky had the record for the most assists in a season and all-time. Nicky’s basketball career spread across 4 decades and she was still winning Scottish Cups in her final year with Polonia Phoenix. Throughout her incredible career, Nicky also coached almost everywhere she went, passing on her knowledge and expertise on both sides of the pond.